So today was one of those days where I just felt fast and strong and have idea why. Maybe it was the decreased workload in the past few weeks. Maybe it was getting around 12 hours sleep the night before (thanks Paige!). Nutrition? Weather? State of Mind? My own mind swims when I'm running well, trying to figure out what I did right. It's like on Thanksgiving, when we give our dog a big pile of turkey scraps in her bowl and I imagine her little brain is swimming with the question, "OK, WHAT WAS I DOING RIGHT BEFORE I GOT THIS? THINK DAMMIT - THINK!"

Maybe it's just a trick our bodies play on us from time to time. Just to keep us in the game. Or just to mess with us. Ultimately I don't care. I'm just grateful when those days happen.

Yesterday I got new road cycling shoes. I hadn't replaced my shoes in like 15 years. The old ones were so old school. Flexible and none of the whiz-bang stuff they put into today's shoes. My new shoes were designed by Andy Pruitt - and have things like FACT carbon fiber, body geometry design, a varus wedge and metatarsal buttons. I don't know what any of those are, but my old shoes just had a buckle. But despite all the marketing mumbo-jumbo, there is something to them. I put them on and went for a ride and zowie - they sure performed. I felt like my shin was connected directly to my crank arms. The bike just flowed under me like it was part of me. I took off like a bullet, sailed up hills and basically felt like there was an engine inserted deep into the frame somewhere. No pain and all gain.

Today I went for a 12 miler through Bear Creek with my favorite running partner - the dog of Thanksgiving Day fame from above. I was hauling. I felt strong, fast and fluid. Like a runner should feel. The dog was not just trotting along with her mouth closed in the insulting way she usually accompanies me. Nope. She was having to lope, and was panting most of the way. When we got home, she laid down on the floor and went to sleep. I had 'spent' her. Something not easy to do as we've often speculated that our dog is the result of some freakish genetic shelter experiment that blended a cheetah and a rocket sled in a swimming pool size petri dish and then crammed the resulting DNA strands into a sleek and compact 35 pound unit that is our dog, Indy. It's not often that I can tire her out, and I felt good about myself for having accomplished that today.

So why was I fast yesterday and today? Was it just some collision of hard work and hormonal timing that led to an 'abracadabra' moment? Who knows. I was just happy to string a couple of those days together. 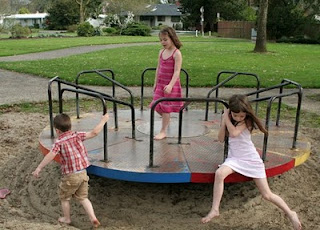 I love this time of year. With the fall marathon behind me, and the 20+ weeks of focus, training, schedule, 20 milers, nutrition, etc. all behind that, it's nice to get out and remember the most important reason why I run. It's fun!

That isn't to say that I'm now just sitting on the couch, drinking Pepsi out of the 2 liter bottle and eating M&M's out of that 'Hefty' trash bag size they sell at Costco (don't ask how I know of such things). I still watch my nutrition and am getting out there and exercising. But there's just less structure to it - especially the running part. It's more 'playing' with running. Enjoying the fitness I built up over the year and feeling like my 3 year old must feel when he runs full speed into the armchair, rolling over the soft padded leather arm, his body twisting in a way that would send me to the ER. Laughing the whole time.

On Saturday, having run out of time during the day, I decided to commute on my road bike to my friend's house for his poker night. It was dark half-way through my ride to his house, and completely dark at 10:30pm when I left for the 17 mile ride home. Light strapped the front, full moon in the crisp fall air. I was absolutely loving the freedom from the steel encasement that I travel in most of the week. Flying through the park, I disturbed a coyote's pursuit of a rabbit. I felt good about that, as did the rabbit. Sorry coyote.

On Sunday my buddy and I met for a trail run in Bear Creek. Leaves falling, cool air, no agenda. We just set out to run 5 or so miles at a pace we could have a conversation at. We talked the whole time, about running, about family, about nothing in general. We played around on some hills, running up and down them with different techniques. Playing to see what worked, what didn't. We meandered through the orange leaf covered trails, with only a general sense of which direction we wanted to head next. For someone that spends 99% of their time running alone, it's a real treat to run with friends.

It's also nice once in a while to 'rest on your laurels' of all the hard work we've put in through the year. It reminds us that the race itself is just a test. The real learning our bodies do is in the months leading up to the race. I read an article that said that most marathon training programs (purposefully)keep the athlete slightly fatigued all the time in a fine balancing act to maximize the training response (blah, blah, blah..). It's nice to back down the training stress to the point where we 'feel' fast and springy.

Of course there is the eventual guilt that sinks in. Yesterday work took over my entire day / evening and I didn't get out for a planned run. While I mentally gave myself the 'pass', emotionally, I felt that I was slacking off and being lazy. And this only 10 days since the marathon. Something tells me my 3 year old doesn't fret too much that he hasn't launched over the arm of the chair in a day or so.

We adults are a funny bunch. We need to remember to run and play.
Posted by Kevin at 8:53 AM 1 comment:

So this was the first year Denver was an 'official' Rock and Roll marathon. The change was for the better. Don't get me wrong, the 'old' Denver Marathon (which I've run three times) was really nice. But the addition of a larger production increased the crowd size as well as the amenities.

The start area was about the same, except this year they had more formal corrals based on an 'honor' system of submitting your predicted finish time before hand. Enforcement wasn't heavy handed - so I'm not sure if it changed much - although I suspect awareness probably does have an impact. I definitely didn't feel as bunched up as last year in the early part - but even the bunching of years past wasn't terrible and it opened up with plenty of the 26.2 to go!

The on course bands were 'ok' - it really was frustrating to a lot of us that many of them were either playing 'lame / slow / depressing' music (not 'Rock 'N Roll') - which isn't conducive to running, but also many were taking breaks or just putting in a half effort. To me - if you sign up to play the event, then put forward the effort. I'm sure there are lots of bands that would like to do it.

Big shout out to the band playing 'unofficially' on the lawn of a house on the West side of Wash. They were there last year too and they were better this year. But mostly, like last year they were 'fun' and 'enthusiastic'. Great job guys!!

The water / feed stations were excellent. I actually took my own bottle for the first 8 miles to avoid the melee that is the first few aid stations, but honestly probably could have hit mile 4 or 5 and not been in too much of a cluster-frag. I just liked having my own 'sauce' for a bit (Cytomax Fruit Punch if you care to know).

Luckily I didn't have to 'stop off' anywhere, but the porto's were 'there' on the course. As usual there could have been more porta potties at the start (in Paige's words - figure out how many you think you'll need, then double it). But it wasn't terrible.

The after event was nice. Good chute funneling you out. Good commentating at the end. Food / water handouts had a few choices - so that's nice. Very well organized.

Family meeting areas were a nice touch with letter placards of last names which made it easy for Paige and I to find each other after the race. She ran the 8 mile first leg of the relay with 'Mommy Mayhem'. btw - she found out later that pop culture seems to 'misuse' the word 'Mayhem' - it actually means specifically dismemberment.

The beer tent was nice - but they ran out of beer. Luckily we were there early enough to be quenched.

All in all, nice course, great organization!!
Posted by Kevin at 7:32 AM No comments:

So my goal was to run a sub-3:10 (which means I needed to run an average pace of 7:14 or better). I figured that was a stretch as in the weeks prior I seemed to be more likely able to turn a 3:15. But I figured I'd rather try and fade in this race, than run a solid 3:15 and wonder.

So out I went. At City Park and 8 miles in, things felt good and I was turning smooth 7:12's. I decided to check in with my body at 16 as that is usually a good indicator for me of where things are at.

As I rounded into Wash Park at mile 16 I could feel that I only had maybe had only another 5 miles in me at that pace. I decided if I went for broke, then bad things would probably happen around mile 21. I've never DNF'd a race so I decided to ratchet back and put in a solid race instead. Which I did. I finished strong, but had nothing left after the finish line.

More on the course and event later. I'm hitting the hay.
Posted by Kevin at 11:47 PM No comments: