Barefoot Running - PART I (No, the running shoe companies aren't out to get you)

So lately when someone finds out I'm a serious runner, the first question is likely to be regarding my thoughts on barefoot running. My answer has become pretty standardized in the 8-10 times I've been asked about it, so I thought I'd write it down. Then I can just have business cards printed with the URL for this blog and tell them, "Here is what you seek" :-)

For those not familiar with the concept, barefoot running has most recently been made famous by the book, "Born to Run" by Christopher McDougal. The book chronicles a tribe in Mexico that runs alot. Like hundreds of miles at a time, wearing sandals made from old tire treads. Of course the book is much more than that - and in fact McDougal does a great job of using this tribe as an example of how we have gotten away from running 'naturally' and the role that the modern running shoe has played in the resulting injuries and poor running style of today's modern runner. The book in itself is a fascinating read and I highly recommend it, but before you get the 'religion' of the book and start tossing your Nike's to the side as you head out the door - let me offer that while the book is a great 'story', offering some great anecdotal evidence to evangelize that running barefoot will solve all your injury woes, remember (as always) that a balanced perspective is the way to go.

The basic argument for the barefoot running goes something like this:


Despite all of the advances in the modern running shoe, such as cushioning and motion control of pronation, the injury rate in recreational runners has stayed about the same. It is the modern running shoe itself that masks the natural feedback from our feet, that causes an unnatural stride such as heel striking and reaching the foot too far out in front (over-striding), thus resulting in unnatural running form and causing higher injury rates than would occur if we ran more with a mid-foot strike that landed underneath us as we ran. Further, running shoe companies propagate the 'myth' of the modern running shoe technology in order to sell lots of shoes and make money - all at the expense of the recreational athlete.
So first off, let's take the argument apart a bit. Another way to look at the lingering injury statistic would be simply to say that prior to the modern running shoe, only people well adapted to run actually ran. People who did not adapt to running quickly (weight issues, over-pronation, etc.) simply got injured quickly and gave up on running - thinning the herd via survival of the fittest, so to speak. The modern running shoe however, allowed a lot of these non-well-adapted runners to continue running and as a result, we've seen at least two running booms which resulted in a sustained injury rate precisely because the running population is now more diverse i.e. people who maybe shouldn't be running 'as much' without proper adaption are doing too much too soon, or running improperly. Ahhh... now the last part is valid. The modern running shoe does mask the natural feedback that 'teaches' us to run properly. However, this doesn't imply that you should chuck your shoes if you want to learn to run properly. That's because invariably, despite all of your attention to proper running form, you will come down improperly on your foot from time to time. Think of the modern running shoe as an air bag. It's nice to have it when a mistake happens, but it doesn't give you the license to drive like a maniac.

Finally, let's dispel the myth that running shoe companies propagate the modern running shoe technology simply to make money. The truth is, they can make money off whatever the public wants. In fact, right now most of the running shoe companies are making very good money off the barefoot running craze since it has naturally led to the 'minimalist' running craze - shoes that protect your feet from glass, stones, etc. but offer little to get in the way of the natural feedback provided by barefoot running. And guess what - these minimalist shoes cost about the same as the 'classical' running shoes. And guess what else? Minimalist shoes have always existed. They were called 'racing flats'. To say that there is some 'conspiracy' in the running shoe industry to produce shoes that are detrimental to recreational runners ability to run a lot (and thus buy more shoes), is just downright silly.

In fact, a company called Vibram Five Fingers (http://www.vibramfivefingers.com/) which makes a very minimalist shoe that kind of looks like a rubber overskin for your feet (and was predominately mentioned favorably by McDougal in his book) has had an absolute explosion in sales (i.e. made a TON of money off providing a product that aligns with the barefoot running craze). 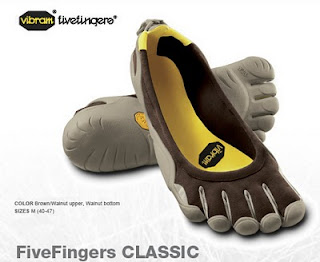 Ok, so now that we see that Nike, Asics and their big shoe company brethren  aren't out to purposefully cripple our feet, we can put that aside and dive into whether there is something useful to get from the barefoot running craze...which I'll do in Part II :-)
Posted by Kevin at 2:54 PM

Get daily ideas and guides for generating $1,000s per day ONLINE for FREE.
JOIN NOW