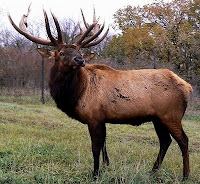 Having lived in Colorado for about 18 years now, and being an outdoorsy kind of guy, I've had a lot of encounters with wildlife, both on the bike and while running. Putting aside the days of riding some rural dirt roads in Michigan and having some Deliverance-looking Billy-Bob shouting "get 'em boy", encouraging his shepherd already in full pursuit of us cyclists, I'm referring here to real wildlife.

The title of this blog is what occurred to me upon my latest encounter, up running the back trails behind the Ken Caryl hog back. I was quite a ways up there, west and up from the neighborhood. I had just climbed up Manor Trail and dropped onto a side single track that would me back down to Manor House. About 100m onto the trail, it struck me that someone had parked a large brown van on the trail. Now - this is actually the second time I've mistaken a large bull elk for a brown van. Both times I was less than 30m from them. My first thought was one of amusement that the 'large brown van' had come to mind twice. My second thought was a little more around how this animal was looking at me.

He had been meandering down the same trail in the same direction as me when I came upon him. I stopped and he stopped. I was staring into his hind quarters and his eyes in that big antlered head that was turned over his shoulder and staring back at me. I made a 'PSHHHHTTTT" sound to try to spook him off the trail so I could pass. He didn't even blink. And that's when the second thought (and the title of this post) occurred to me. In his eyes, I'm just his little, Lycra clad bitch. And the fact that he hadn't turned to gore me yet just showed how insignificant I was in his eyes. I knew rutting season was over, but didn't want to wait around to see if this particularly large bull knew how to read a calendar.

So, I slowly backed up. And seeing that I was not going to make any further claim to his trail, the bull turned around and started his lazy pace back down the trail. I found a different way back.

I've lived in Colorado long enough to know bull elk are not to be messed with. They stand about 5 feet at the shoulders (this one looked to be about my height - but my perception may have been altered). They weigh about 700 lbs and have built in goring tools on their heads. I had an empty water bottle and a GPS watch I could have thrown.


Other wildlife are a little less threatening. Coyotes are remarkably curious about runners and cyclists. They will follow you and know exactly how far to scat when you "PSHHHHTT" at them. Just out of reach, they know they can avoid you and still follow you. Sometimes I feel like they are waiting for me to stumble - and then they'll give that Coyote howl for, "Hey - we got a weak one in the herd here". I always try to look strong when in the presence of Coyotes.


I've been attacked by a Falcon - twice. I was riding my mountain bike and he swooped down, using a sharp talon to take a chunk out of my bike helmet. Turns out there was a little reflector on the back that caught his eye. I removed it after that and wrote Specialized an eMail.


I've only seen two mountain lions. Once I was riding up a road in the Conifer area, and I saw him slink across the road about 200m ahead of me. The other time I chased a cub out of my garbage (again - in Conifer). I thought it was a cat until I chased it off and realized it was pretty large. It had spots, so I didn't right away know what it was. But then I was at the Museum of Natural History and learned that mountain lions have spots when they are cubs. Glad I didn't go out wandering around after it and run into it's mom - who probably didn't have spots, but did have big teeth and claws.


Deer are almost so common they are not worth mentioning. In most of the neighborhoods where they feast on aspens shoots and flowers, they won't even look at you when you go past. You're no threat. They are protected there and they know it. On trails in the back-country they just stare at you or scoot away.


Big horn sheep are another group not to be messed with. I was once climbing up Mt. Evans on my road bike when I was slowed by a bunch of cars that had stopped to look at the Big Horns. One car with out of state plates had the windows down and the kids were reaching out towards the sheep with bread. I rolled up and knocked on the driver side window and told the dad when he rolled it down, "Uhhmmm... you know - it's not a petting zoo dude. Those sheep can turn and cover that 8 feet to your car in about 1/2 second" - He thanked me and yelled at his kids to get in the car. Yeah - like it was all their idea.


Of course then you have the smaller, almost inconsequential wildlife. Rabbits will stand and stare at you until they realize that they are not invisible. Prairie dogs are predictable enough on the trails to keep from running them over. Squirrels - not so much. They are freakin' suicidal. They will wait until the last minute and dart at your wheel.


Geese are mean and even meaner during mating season. I've had one attack me in flight as I passed on the bike trails downtown along the Platte. I hate Geese.


Those are the animal encounters I've had to date. How about all of you? Ever feel like you were at the bottom of the food chain?
Posted by Kevin at 6:10 PM

I had a coyote go for my leg as I sped past him, he missed by an inch, chased me for a little while, then quit. I finished my ride in record time!

I just ran Ken Caryl today and saw three elk and several deer. There were some utility workers trying to get to an electrical box and the deer would not move away from it. Pretty funny.