10K Race in the Snow and Cold 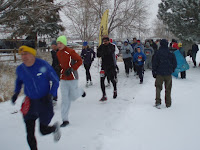 It's been cold and snowy here in CO lately. Not extreme certainly by midwest standards as I still remember what 10 degrees feels like in MI and walking through 3 foot drifts to school... or was that my dad?

But by Denver standards, it's been downright wintry. And for someone that has lived her for almost two decades, I've long since lost my ability to physically comprehend classic MI temps that can dip well below the zero energy levels of deep space.

That hasn't stopped me from running, but the same mileage / intensity definitely is taking it's toll on me. As part of my 2011 plan, I raced a 10K with the Rocky Mountain Roadrunners this past Sunday. That was the morning when we woke up to 4 inches of snow on the ground, snow still falling and dropping temps. I dutifully got up early, and drove through the sludge to the race site north of town. Having a personal coach now pretty much guaranteed I couldn't bag the race since I'd have to endure my own sheepish admission of failure to someone other than my supportive wife that would have been happy for me to crawl back into bed and tell her I was staying home.

And as is the usual chain of events - I was so happy once I was running that I had pushed through the dark / cold / snowy demons of the morning and toed up to the line. (All other runners know EXACTLY what I'm talking about).

Now you might think that I was only racing with 5 or 10 other nut-balls, but this is Colorado. I swear that poor conditions generally increases the field out here. Certainly it pushes up the talent pool on those days in a synergistic chain of events - people that push through the morning demons to race in crappy weather are faster, precisely because they generally have the resolve to push through and run in crappy weather.

The total field size was about 70+ runners. The races are part of a 'trophy series' that use a handicapping system to stagger the start. I've looked at the math in the spreadsheet calculator and while much of it is beyond me, the general principle is to do two things. One is to put the emphasis on proportional, consistent improvement as a measure of who 'wins' the races and overall series. Two is to stagger the start so everyone is finishing as close to at the same time (rather than all starting at the same time). This had a nice effect on this day of not slipping and sliding in some chaotic melee mass start.

The race started at 9am. As this was my first race, I had to guess at my 'handicap' via finishing time. Knowing I can run a 10K in about 40 minutes I looked at the conditions, took into account that by the time I was on the course it would be packed down a bit, the fact that I had peppered the bottom of my old shoes with sheet metal screws (they work btw), 42 minutes - making my start time 9:27:53 - needless to say - I was overly optimistic.

I ran 45 mins and change. The moment I was on the course I realized I wasn't going to hit 42 minutes without upping the danger of biffing. The sheet metal screws provide better traction, but rounding corners and running on raw pavement under the bridges was a little harrowing for me. I've gone down on the bike onto cold, snowy pavement before. The ground is harder and you bounce less. You lay there hoping the snow will cover you up quickly and you can slip into the primal calming that comes with a wintry grave, but eventually you realize you have to get up. You then feel like someone beat you with hammers for the next few days. It's something to avoid.

Overall, my pace put me in absolute finish time in 9th place. Running against my handicap, I was further down the field obviously. I will point out that like 5 of the top 9 guys were all under 40 years old - but I've mentioned before that age grouping gives me little solace. I don't like not being able to run as fast a 20 year old college kid. I deny it with all my delusional might.

After the race I helped break down the registration tent, carried cones to the team van and just got to know some of the folks in the club. Very, very nice folks and a real pleasure to race with. I'm so glad I joined the club. I stopped off at Starbucks on the way home and got my morning coffee reward. Then home to a warm shower and a license to lay low the rest of the day.

The last few days of running have been fun, but tough in the cold. Today and for the next few days the temps are going to push up into the 40's and 50's and I'm happy to have that break from the Snow Miser. I can't wait to run warm again and am tougher for having endured the cold and snow.