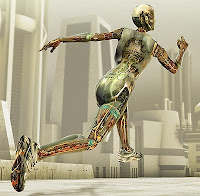 So I wrote a while back about the joy of running in new shoes, even when those new shoes are just a new pair of the same pair I've been running in for the past 2 1/2 years (about 10 or 11 pair to date of the Pearl Izumi SynchroPace III).
So imagine how exciting it is to have a new pair that is really a new 'model' as well!
I went in to pick up my usual model. But when I got home I realized that the inner liner was missing. Since I was headed back to the store, I started thinking that I really hadn't had my stride looked at by the store in the past couple of years or so. And I had spent the better part of the last year specifically improving my stride mechanics.
<BEGIN GEEK SIDE-BAR>
WARNING – Geek like technical but high level enough to spark wild debates by those that are really into this sort of thing. Read at your own risk – I won't respond to arguments on the forum since since nobody but geeks care about the following explanation being highly accurate
Now – shoe models are generally classified along a spectrum from Neutral, through Stability through Motion Control. It's all based on how much support the shoe offers to offset natural pronation through the foot-strike. Pronation is the act of landing on the outside of your heel and then rolling inward to where the foot-strike departs on about the big toe (inside). The degree to which you pronate is based on both your bio-mechanics and your stride mechanics. Neutral runners need the least amount of side to side support, while Motion Control folks need the most to support the foot from 'collapsing' to the inside on the foot strike. There is a lot of debate recently about whether suppressing pronation is a good thing or bad thing, but I go with the conventional wisdom that any movement that is not solely aft to forefoot (neutral) is wasted energy in the wrong direction (laterally) – unless of course you are having issues through suppressing pronation – and then all bets are off. It's between you and your shoe expert at the local running shop.
Previously I was a lower end 'Stability' runner – and I've often thought that this was mostly due to over-striding in the past analysis I've gone through since naturally my feet tend to supinate just standing around.
<END GEEK SIDE-BAR>
So I spoke to the manager at Boulder Running Company (my go-to running store), and tried out a few models on the treadmill there where they can video tape you running and focus in slow motion on your foot strikes.
Turns out I am now a completely neutral runner and could move to a couple models shifted in that direction (the Pearl Izumi Cruise model). Not wanting to make drastic changes, I went with the model right in between (the Float) with the notion to move to the Cruise on my next 'new shoe' purchase when these wear out in about 10 weeks or so. Needless to say, they felt great on my easy 6 miler on Saturday. Just a slight change, but I can definitely feel the difference.
So that got me to thinking to do something I've been wanting to do for a while – get a pair of racing flats just for races and some fast track workouts.
Now racing flats are a whole different class of shoe. They are intended to provide minimal support and be as light weight as possible. It's not a shoe you want to log high mileage weeks on, unless you are an elite runner (which I am not). But in a past post on barefoot running, I talked about how useful it is (at least to me) to have very little between you and the road as a way to build 'foot awareness' and that racing flats were a nice way to do this.
So I went back on Sunday and after trying a few different models, settled on the Brookes Racer ST4 – they offer a little more stability than the ST6 which a lot of the elites wear. These things are about 1/2 pound less than my previous training shoes. That's a lot of weight!
Needless to say – I'm totally psyched to have a couple new 'toys' in my running gear bag.

Regaqrding "racing flats" and general use.

As you know, I am not a natural runner, I'm more of a pack mule than a race horse. When I used to run on the roads I was a terrible heel striker and would beat myself senseless quickly with an inefficient and heavy stride. I attributed this to being generally heavier than most runners, and proportioned more for hiking and hauling than for running big miles.

Since I've been taking things more seriously and getting into multi-sport events (Tough Mudder, Warrior Dash, and possibly an XTerra) I did what any geek athlete would do: hit the internet and the books to figure some stuff out.

Yes, I got some Vibrams after reading "Born to Run" but quickly wrote them off for general use in my case. But the experiment did demonstrate something to me: if I remove the option of heel striking, a la barefoot runners, I found a more efficient stride. It's still not beautiful, but it's much better.

I experimented with a few different trail running shoes, but found that less is more even for daily runs. Currently I am using New Balance MT101 shoes, which are about as flat as a trail shoe can go. It helps that these are also wider than most "D" width shoes, since I usually wear "wide" or "2E" shoes, and have some heel padding. After a bit of break in, I'm wearing them for my indoor cross training and for my local training runs for the upcoming April Tough Mudder.

Perhaps true track flats would be too thin for general use, but since the barefoot/minimalist movement has gained steam (and credibility) there are more and more options for light weight footwear that let your stride/biomechnics find its own way to keep you moving.