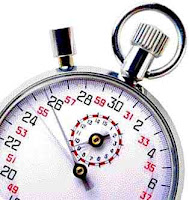 I don't do New Year's resolutions. I don't have any issues with them, but I generally follow the rule that if you want to change something, then you should start today.

That being said, the downtime from work, family time and reflection / free-time during the holiday usually lends itself well for me to do some planning for the coming year.

One thing I'm going to do differently this year which I'm pretty excited about is to get a personal running coach. I already found someone that Paige had been impressed with who ran some track workouts for her. I corresponded over some eMails and liked her philosophy and approach.

The nice thing about deciding on a coach was that she immediately sent me her athlete questionnaire to fill out - and that forced me to do some goal setting and race planning for the year (which I might have put off for another month or so).

So my overall goals for next year are to run a sub 1:30 half marathon in the Spring, and then a sub 3 hour marathon in the fall (obviously at sea level and with the most advantageous course possible while still being a certified course and official qualifier). My previous PR's are 1:31 for the half and 3:18 for the marathon - both at altitude.

To get to those goals, I'm going to focus on going faster over shorter distances (10K to 1/2 marathon) for most of the winter early spring, with a lot more races thrown in at those distances - tentatively one a month. I belong to Rocky Mountain Road Runners and they have a great Trophy Series - so it's easy for me to get in at least one race per month in that series alone.

From a cross training perspective, I'm 'resolving' to be more consistent on my strength and core training. I've already got a good work ethic that I developed around stretching over the summer, and my latest checkup with Pete (my PT) says that everything is lined up the way it should be in my lower body.


Finally - I'm going to take my nutrition just up a little and drop 7-10lbs slowly, just by eating a little less in the evenings (I'm a horrible snacker) and doubling down on my fruits and veggies.