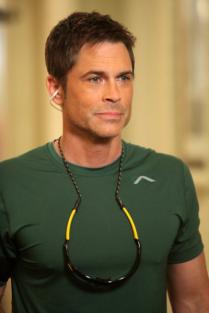 So my sister recently commented that she and Brendan (her fiance) found the character Rob Lowe plays on "Parks and Rec" to be a dead on caricature of me. (actually, I'm not sure she even said 'caricature' ;-)

I've seen Parks and Rec before, but haven't watched it religiously, so I was curious to see why they thought that. I watched a couple episodes with Paige, specifically the one Kirsten recommended (Flu Season) and yeah... ok...

If you haven't seen the show, then here's a summary. Lowe plays this type-A runner / triathlete guy. He's very 'chatty' and always seems to be 'on' (and a little hyper). One funny line in the show is where he's telling his girlfriend (played by Rashida Jones):

“My body is finely tuned like a microchip, and the flu is like a grain of sand. It could literally shut down the entire system.”

There's another scene at the end where the day after enduring a near hallucinogenic bout with the flu, he turns down a ride to the office from the hospital - "just going to do a light 15K" because he 'missed yesterday'. Yeah, ok... I've done that - well, not from the hospital, but definitely the first day after being terribly sick, mostly because I felt I'd 'missed some days'. I've also made portabella mushroom burgers on the grille (another episode). Anyway - if you know me, you can watch the episode 'Flu Season' on line and tell me if their charges are justified. Honestly, there are worst characters to be likened to :-)

Anyway, it got me thinking. Part of what makes his character funny is that the show takes place in Pawnee - and near as I can tell, is pretty devoid of anyone else athletic (Amy Poehler's character is addicted to large quantities of waffles and another character is obsessed with maximizing his meat intake).

But I almost bet the Lowe's character is found to be much funnier *outside* of Colorado than it is to most residents here. Colorado is known for being a fairly active state. There are a lot of professional and elite athletes here and even more elite wanna-be's that would be shoe-ins for Lowe's character.

But I get it. I travel enough that I see the contrasts. Honestly, sometimes I land in an airport (of cities that shall go nameless) and I'm like, "Whoah..... "

But when you live here, it's kind of a bubble with regard to that. We still have our own struggles in the state with smoking and weight management - but there is definitely a large group of what many in the country would consider 'exercise nut logs' - people that sit and watch Lowe's character and say, "Oh I get it - it's funny because his co-worker is still DRIVING to the office even though it's a nice day outside and missing an opportunity to boost his immune system and kick the flu to the curb" - in short, I think we'd miss the intended joke.

But I like it here, and I like being considered that kind of nut log. And I have lots of friends here that feel the same way. We live here almost precisely because we know it's more acceptable to run in 20 degree weather while it's snowing.. on Thanksgiving morning (so you can eat more guilt free at dinner of course!)

I like that if I'm out in a pouring downpour and a 40 mph cross wind, and pass another runner - we'll just smile at each other and both of us will be thinking the same thing, "This is A-W-E-S-O-M-E (in a twisted kind of way)"

So, no - I don't think we are all finely tuned microchips here. But we do like to tinker. Tomorrow I'm 'tinkering' with a 2 mile warm-up, a 3 mile race and an easy 5 mile cool-down - wish me luck!
Posted by Kevin at 6:42 PM