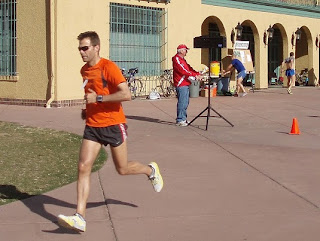 Raced the City Park 4 miler with my running club on Sunday.

The weather was strange yesterday in that at race time (9am), the weather was beautiful in the low 60's. By afternoon it was snowing (although none stuck around). Quite a head-wind during the race, I think I could have run 6:32's without the wind.

What's weird is that although I had no issues during or after the race, I woke up at 11pm last night with a pretty painful tweak in my right foot. Strange. I must have come down on it wrong (although I don't recall and wasn't really outrunning my pace). I've run harder workouts in the past few weeks - not to mention the mileage this week was only 40 miles - which feels like a vacation now (previous weeks have been about 60 mile weeks). Strange too in that it didn't hurt until after I went to bed.

Ah well, it happens. Not a recurring issue for me so I just need to let it heal. I'll ride the bike this week as rehab until it's right again. Hopefully I can pull it back together before the Platte 1/2 marathon this coming Sunday - that's a big race for me. But if not, there's not much I can do except plan for another 1/2. Bolder Boulder 10K is next on the agenda (end of May) - although if I don't do the Platte then I'll have to toss in another race between now and then.

Other good news is that while in China I was able to keep my weight down and in fact lost a pound. It's nice to be back to my usual nutrition and diet. The food in China is good, but not overly healthy by sport's nutrition standards (not enough fruit / lean meats and too much oil).
Posted by Kevin at 12:20 PM