On the road to recovery... 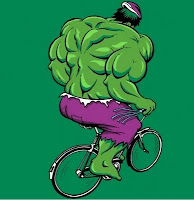 So it's been a little less than a week since my hamstring went 'twang' on the track and things are recovering well. Really the only thing I can't do right now is run - although I was encouraged on Sunday doing a mile at an 11 min pace on the treadmill. I could have gone faster / further - but it really was just a test, I know better than to push the envelope on things like that.

I had a couple of sad moments last week. One was when I got my 'Final Instructions' eMail from the Platte River 1/2 marathon. I had planned on running it and was 90% sure I'd break 1:30 based on previous pacing workouts. And I was REALLY looking forward to the race for the past 3 months. I just sighed and deleted the eMail.

The other moment was early Sunday morning when I woke up and saw how beautiful a day it was (minus the wind) and felt a little 'left out'. I was glad though that the weather turned out nice for everyone running it - especially with the up and down report throughout the week. Never would I wish for miserable weather just to feel better about missing the race. If anything, bad weather would have made me feel worse. In a way, I was happy that my fellow runners, many of whom I know - would have a good day.

At around 10:30am I saw the clock and realized I would have been finishing about then. And that made me feel a little sigh of relief that it was now behind me (either way) and I was 'moving forward' again. I know that might sound silly, but I promise you it makes perfect sense.

Aside from that, I've actually been having fun and have worked out every day since taking last Wed off. I've been in the gym lifting weights, out on the road bike, and did 30 minutes of elliptical and a mile treadmill run on Sunday. Felt great afterwards and although my hamstring injury is still 'there' - the pace that it's recovering tells me that it probably wasn't as bad as I originally thought.

Bike riding is my salvation of course, because it's something I love (I wrote a whole post about re-discovering my love of cycling last year) It gets me outside and in fresh air. I can put up with the gym, but as I've said before, I'm an outdoor cat.

This morning I commuted in from my house (about 19 miles-ish) on the Can-O-Swill; my long time commuter bike that has a whole story behind how I acquired it, how it got named and how it acquired it's 'rocket-popsicle' paint job (shown below in an earlier photo). 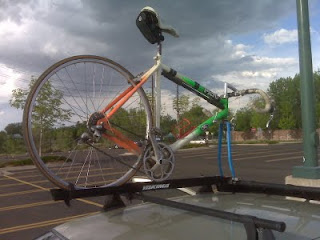 Last night I decided to treat myself and get a nice commuter pack (retiring the crappy but functional JanSport pack I've ridden with for well over a decade and a half). I got a very nice Osprey Talon 22 from REI. The thing is whiz-bang out the wazoo and makes my Jansport look like a dinosaur. And with my REI dividend and 20% off coupon which expired yesterday, reducing the $99 retail price to $35 wrenched out of my wallet. 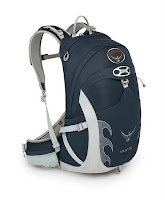 The pack worked great this morning. No reaching behind 10 times per commute to re-center the pack after turning a corner. It just sticks to your body. The weight was also much better balanced. Sheesh - it took getting injured to pull the trigger on this?

Got into work and stretched EVERYTHING. Leg of course feels great. There isn't anything that cycling can't fix - it's the wonder drug.

Tonight I'll have a commute home, then the gym to lift tomorrow and maybe another test run on the mill. I'm hoping to be running outside by next weekend.