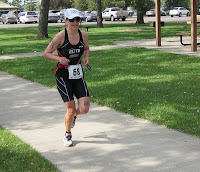 Today was the Loveland Lake to Lake Triathlon. Paige took 4th place in her division (out of 73 racers). That means she's headed to Nationals in Vermont this Fall! I'm so proud! She's been working so hard at it. It's nice to see it paying off so well for her and she really deserved the excellent finish!

Luke and I were there to cheer her on. We stayed in bed (at the hotel) when she got up at 3:45 to ride in to the start at 5am and set up her transition area. Yikes! Tri takes a lot of gear. Running is just shoes, shorts and shirt. And if you forgot the shirt, you'd still be ok (as a guy ;-)

Luke and I got up around 6:30am. Well, he woke up and then woke me up saying, "Daddy. Let's get up now". He's a perfect alarm clock. We grabbed breakfast at the hotel, checked out and headed down to catch her coming in from the bike ride. I knew she was having a good race because she arrived about 5-8 minutes before we both had calculated she would and she was all smiles running into the transition area.

Then we ran over to cheer her on as she exited for the 10K run.

I reset my watch and we headed over to the play area / swings where Luke made a bunch of new friends. Then just to be sure we went over about 15 minutes early to the run course at a point about 1/2 mile from the finish. Sure enough, she was a little early again and I only had seen a few women go past, so I knew she was at least in the top 10. And she looked really strong going past - and that's after just under 3 hours of racing!

When we met up with her at the finish, they were into the awards, 4 places deep in each division. When the started reading the first place winner and it was from Littleton, I was a little hopeful, but when they read the fourth place as "From Littleton Colorado..." I pretty much knew it was her. A 1/2 second later we knew. It's cool to hear your wife's name over the loudspeaker at such a major event.

Just for the record, she was hoping for top 10, I told her last night she would be 5th :-)
And she's been all smiles all day.

So congratulations to my babe for such a great race! Woohoo!!
Posted by Kevin at 5:57 PM No comments:

Just got back from my quarterly trip to China. This trip was especially fun because I took my 18 year old daughter, Kylie with me as a graduation present.

We were there a total of about 11 days. Spent the week in Hangzhou (me working - her out sight-seeing with some very nice hosts from our office that took her to see the sights). I told her that she (and my oldest son, Corbin who went with me a couple years ago) have seen more sights in Hangzhou than I have because normally - I'm just working the whole time.

I did my usual running route in Hangzhou. It rained A LOT - so some days were relegated to the treadmill. And it was freakin' warm and very, very humid. Man, that combo just kills me. I'm not built for it. Probably sucked 20 seconds off my paces. And you get back to the hotel, can walk into the shower fully clothed and not get any wetter (I know - gross). Makes me appreciate the arid climate of Colorado that much more.

On Friday night we flew to Beijing for a couple more sight-seeing days. Went to the Ming Tombs, the Great Wall and of course the Forbidden City. On the group tour on Saturday we drove past the Olympic Complex and saw the Bird's Nest and Water Cube up close. Seeing anything Olympic related always sends chills down my spine. I would love to run a few laps on the track in the Bird's Nest - wouldn't that be cool? Unfortunately the only run I did was an 8 miler on the treadmill, in the very nice Marriott gym.


Our hotel in Beijing was very nice - Marriott City Wall. I got a free upgrade on the room, nice big room with two king beds. Kylie was styling :-) I told her that in general, having status (Marriot, Airline, etc..) doesn't suck.

Flew back on Monday - long travel day. We got up around 4:30am, cab to the airport, flew to Shanghai, then Shanghai to San Fran and finally back to Denver. Hotel to front door travel time was a total of about 30 hours.

I'm suffering from the usual jet lag from the trip back. It rarely even affects me more than a day on the way out, but on the East to West travel (back home) - I just feel 'flat' running. Takes about 10 days for me to feel right as rain again. Although I did a track workout this morning and felt pretty strong, hitting some good paces on what was a tough workout:

Did the above 2x followed by one more 800m. I was paired up with Bridget, who I had never run with before. My coach neglected to tell me that Bridget is a track-star ;-) Man that lady was fast. Really great motivation to keep up my pace!

Next few days I'll just do some more recovery running to reset the body clock. Paige has a race (tri) this weekend. I'm looking forward to hanging with Luke and being a spectator (i.e. watching other people suffer ;-)
Posted by Kevin at 9:08 AM No comments:

So one thing I've been thinking about for a while is losing some weight to get faster. Nothing drastic - at 6'1" and 168lbs, I feel pretty lean and healthy.

But when I look at the top 5 age groupers in my division, they are leaner than me. So, it's worth a try.

Statistically, 'they' say ('they' being people who seem to at least know how to post scientific looking studies on the Internet) - that all things being equal, a pound is worth about 2 seconds off your race time. That's pretty substantial - although certainly there are practical limits. That pound lost needs to be a 'useless' pound (like fat that never gets used in a race) - not something useful like muscle or bone mass.

So just pinching around my body, I'd estimate I have around 5-10lbs of 'useless' stuff left before I'd start shedding the useful stuff. And if I keep to a gradual process - I should be able to quantitatively and subjectively determine if things are getting faster or slower.

At this point, my goal for weight loss isn't 'health' per say - it's about getting faster. I'm sure I'll look a little too lean to a number of people. But I also think we're built to be a whole lot leaner than we've come to expect of ourselves as a species. If you look at other mammals (like dogs) - a vet will tell you that when the dog looks a little emaciated, then he/she is actually quite healthy. Our little Indy-Unit (as we call her) is sleek and light with some ribs showing. And man, is she fast :-)

So as to the 'how' - that's pretty easy - especially since running alot creates quite a furnace. No real 'diet' per say needed - in fact I think we actually eat pretty healthy overall. We've long ago eliminated the 'usual suspects' such as soda, fast food, sat / trans fats, etc..

But you can almost always make small tweaks to nutrition that go a long way through accumulation over a few months. And these are changes that I've been meaning to make anyway. So here are my new 'diet' rules:

1. Unlimited fruits and veggies. This includes things like avocados and bananas. I've often been of the opinion that despite the nutritional articles you see every once in a while, you WILL NOT get fat eating lots of fruits and veggies (even things like bananas and avocados). I would be willing to put big money on this strategy to anyone that disagrees.

2. No carbs (except fruits and veggies) after 7pm.

3. Smaller portions at dinner. Go to bed a little hungry. Cut out the snacking (except.... fruits and veggies and small portions of nuts).

4. More 'timing' of calories around key workouts. There is some really interesting stuff around this and I've had some good success doing it here and there. The idea is that you put more of your calories either before or after a hard workout instead of just spreading them evenly throughout the day or week. So on 'recovery' or 'off' days - I eat much less overall.

That's really about it. There are some more micro things underneath each of those 'rules' - but in essence, the idea is just to time better quality fuel into the body. I'm also going to keep my focus on strength training. I've developed a pretty good upper body lifting routine over the past couple months and it's showing some good results. That should remind my body that the 'useful' stuff is still needed day to day.

btw - did I mention that red wine classifies as a fruit? And it's got tremendous anti-oxidant powers to it..... Yeah - I might be reaching here, but my nutritional dedication only goes so far!! :-)