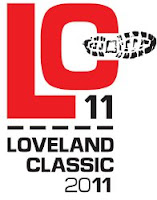 I raced the Loveland Classic 10K this past Saturday. I found out about this race from someone in my track group when I mentioned that I was looking for a 10K distance to do in the late July time-frame. This one was perfect timing, and I'm really glad I signed up and participated in it!

It was the first time I ever won my division. I've usually done pretty well in races, but it was really cool to hear my name announced as first place in my age group (40-49). I was smiling all the way home. btw - I also had the fastest time in the younger pups (30-39) :-)

My overall place was 11th out of 115 total racers with a time of 41:49 - a minute faster than Boulder. The course was flatter than Boulder, but there was less opportunity to draft and it was much warmer.

The race started at 7am, I decided to suck it up and drive up that morning, even though it meant getting up at around 4am. I had looked into finding a primitive camp-site, but couldn't find anything other than developed (RV) camp-sites which, when you price out the site and the park pass - ended up being like $40 bucks - cheaper than a hotel, but sorry guys, that's just silly for a place to drop your tent.

As it turns out, driving up worked out perfectly. The race is small (less than 300 racers split between the 10K and 5K options). When I got there at 6am, I got to park right across the street, picked up my packet and was able to just hang out for 15 minutes before having to start warming up.

It was toasty - probably in the mid-60s at the race start. I knew the limiting factor in pace wouldn't be tired legs or VO2 - it was purely going to be a race against overheating.

The race start was so cool and casual. People just sauntered to the starting line. Then there was a 'racers on your mark' and then a siren sent everyone off at the same time. No tags needed, just one race clock. I liked the simple, casual feel of it all.

The race started out briskly, as they always do. Especially funny was the 4-5 kids that went screaming out in front of me with their mom shouting, "Don't sprint!" But kids are kids. They were easy to dodge as they burned out to a crawl in 100m.

The course is a big loop, slightly downhill on the way out (south) and then you reclaim that elevation on the way back.

I had a far better pacing strategy pulled together this time than for Boulder. In Boulder I had thought about the first couple miles, but hadn't really spent enough time on an 'agenda' for each mile to keep my mind sharp throughout the race. For Loveland I had a plan for each set of 2 miles and was able to stick to that plan.

Probably the best measure of that strategy was how strong and measured I felt with my energy level throughout the race. I felt like I doled it out pretty well and felt like I thought I would at pretty much every mile marker. The last 400m is a slight uphill on a straight road. You see the chute up there, you know you'll get there and just need to grind through it. I pushed it until I was on that edge that, if there was money on it - I could probably eek out another 20 seconds, but at the cost of dry heaving or falling down from over-heating in the chute. I'm trying to put that effort in the middle of the race more than just kicking so hard at the end that I risk hurting something.

The finishing area was so supportive and had a great family feel to it. There was a kids race too which was fun to watch and free Dole frozen fruit yogurt cones!

I think it's a great race and I highly recommend it!!