The Most Dangerous Object on the Path 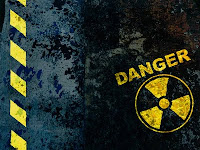 Wired magazine has this recurring segment called, "The Most Dangerous Object in the Office". In it, they highlight some bizarre bit of technology that they have laying around, that typically has a dark side if used inappropriately - or even appropriately. Past examples include 2 foot Tesla coils, Orion flare gun and neodymium super magnets. It's one of my favorite columns.

The column was the first thing that came to mind today on my 6am run around Clement Park. It was actually scheduled for Thursday, but.. well.... a chain of events that started with our housekeeper dislodging the 55lb chandelier onto the glass dining room table while trying to 'dust it' on Tuesday, slipped my runs out a 1/2 day. Luckily housekeeper is fine, chandelier and glass dining room table; not so much. But despite that being the Most Dangerous Object in the Dining Room, this post is focused on a completely different location. The multi-use path.

Now most runners, cyclists and other multi-use users (rollerbladers, XC roller ski users, incumbent cyclists, pogo-stick bouncers) that move more than 4mph would probably rattle off a number of dastardly things that must be avoided.

Anywhoo. The list goes on. You get the picture.

But all of these things pale translucent when the votes are tallied for the Most Dangerous Object on the Path. Yes, I am speaking of that most lethal and evil terror of all:

Often this creature is accessorized by completely inappropriate Lycra attire with a cell phone permanently attached to her ear by one hand, while the other hand attempts to cradle both the football field length leash (fully extended of course) and her morning triple foam, 12 pump caramel soy latte. Every one of these accessories exponentially increases the lethality of the situation. As does the fact that these express tickets to the ER can travel in small packs, and often sport more canines than humans.

However, the real lynch pin in the 'Most Dangerous' equation here is truly the retractable leash. Because really without that, the other slow-moving elements can simply be slalomed and the yappy dog jumped over and outrun. But connect these components with a tether that is nearly invisible on one side, has the tensile strength of unobtanium, and is usually spooled out at least 30 ft across the path, and baby - you better be looking for the ditch your going to bail into.

The person that invented the retractable nylon leash should be tied to a chair, beaten with hammers and thrown from a helicopter screaming. It is a pure illusion of convenience at the expense of any common sense with regard to the safety of the owner, dog or nearby collateral damage it has the potential to wreak. The entire system is as fundamentally unstable as a 2 year old with a pack of permanent markers and a sippy cup of Pepsi. 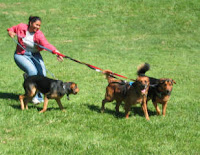 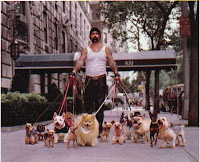 I was once riding into work on the path when I noticed one of the 'MDOP's standing off to one side, staring into the bushes on the other side. My brain processed the patterns.... attention in the high grass... arm a little awkwardly extended from the side... suddenly, a slight breeze caught the tether of mayhem, twisting it to it's broader, visible side... OH CRAP!! I stopped in plenty of time, track standing the bike while the little drop-kick sauntered out from his morning duty, completely unaware of his near-miss slingshot adventure into space. That was several years ago - I still wake up in a cold sweat from time to time.

This morning I was running relatively quickly as I approached an MDOP(2x3 combo) - 2 humans, 3 dogs - splayed out across the 6ft wide path. Thaaaat's right. I called out in plenty of time and in a very low-key gentle voice, "On your left". What resulted was proof positive of the lethal combination of human, canine and retractable leash.

The left-most MDOP locked and pulled the retractable tether on the leftmost DK (drop kick), which instantly dropped it's neck and leaned further left in deft defiance. At the same instant, the other DK controlled by the same MDOP - obviously freaked out by the sudden click of the retractor, frantically ran like an ionized plasma particle in random directions, wrapping the other tether around various appendages of the MDOP combination. The right most DK was unaware of the situation, and kept sniffing off in the weeds on the right side of the path.

I remember recalling an engineering class where I learned how quickly a fundamentally unstable system can spin into a state of complete entropic chaos. I shudder to think had mobile phones or latte's been part of the equation. It would have surely generated a 'divide by zero' error and the entire scene (including me) would have been dragged into a spontaneously created black hole right there on the path.

As I watched this psychotic train-wreck unfold, I slowed to a complete stop and waited for the calamity to clear. Then with an audible 'sigh', I scooted around the left most side of the pile-up. There were no apologies exchanged, either from them, or from me.... I wasn't sure what to apologize for, "Uhmmm, sorry for existing?"

So for heaven's sake, be careful out there. Avoid all the usual suspects, but for your assured safety, never underestimate this Most Dangerous Object on the Path.

Uhhhh... Nice try, but I didn't say the Most 'Disturbing' Object on the Path! 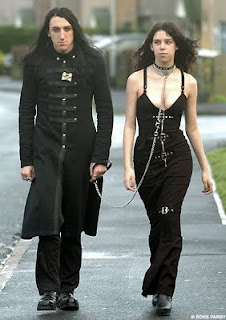