Running in Circles - Random Thoughts on the Track 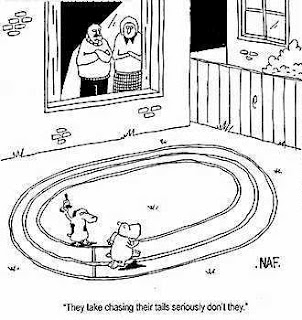 I like running on the track. That encapsulated, consistent little world. You can always see your destination - and generally in speed work it's not far away.

I like the springiness of the track surface and wearing racing shoes. I like being able to run fast, then recover. The feeling of running fast on recovered legs.

I like that all the other distractions are out of the equation, and you can really 'feel' your form and instantly tell if you are running tension free in all your bits and pieces.

And I like running with a group on the track because regardless of abilities - you're always essentially running 'together'. Regardless of speed, you're all suffering the same amount.

And although just about any track will do, even blacktop ones with weeds growing out of them; there are some tracks that are better than others. There's something about a new brown running track in a stadium that draws me more than the blacktop middle school track. Sometimes I make the trek over to Heritage - it's a very professional track and accessible to the public.

Then there are some tracks that I covet running on. Yes, I meant to use that strong of a word - especially the ones that I'm not allowed on. I literally crane my neck to view longingly at the Jeffco track on Kipling and 6th every time I drive past it. Same with The Bird's Nest when I was in Beijing a few weeks back. I would love to spend my whole day just running circles in that stadium. I'm sure I could figure out ways to get into these nirvana venues - but I kind of like that they are not easily in my reach. It's always good to have places that carry a certain amount of mystique to them.

I run with a track group on Tuesday evenings (or sometimes Wednesday mornings). Last night I showed up for the evening session. Got all warmed up only to have the rain and lightening start moving in. I have no issues with rain, but I have a healthy fear of large amounts of electricity. I've read enough stories about lightening strike victims. You're never the same, and that's if you survive. So I pushed to this morning at 6am.

I actually prefer running early. It's cooler out, you get it out of the way and are into the office by 7:30am. Downside is that I have to wake up about 4:45am - yuck.

This morning's workout was 2x800m / 2x600m / 2x400m / 2x200m with 400m recoveries - for the non-track knowledgeable, once around a track (measured on the inside lane) is 400m. So a 2x800 with a 400m recovery means you run twice around the track at a fast pace and then jog, walk, stop to dry heave (off to the side please) - for a lap. Then repeat. 'Fast Pace' varies, and there wasn't a specific one given - so I just as fast as I knew I could complete the prescribed distance for each without compromising the later repeats.

When you've been doing track for a while, you recognize that every distance has a 'feel' to it.

1600m (4x around - about a mile) - Can't go out too fast - you want each lap the same or faster. A mental challenge to not lose focus on the middle laps and slow down accidentally. Usually sounds more daunting than it turns out to be, especially when someone says 6x1600m repeats.... <groan>... but pretty soon you are on the fourth one.

800m - My absolute favorite repeat. It's just long enough to test you and to get into a groove. But you can still go pretty fast, and there is little chance of losing focus. And generally you don't even start to hurt until you're near the first lap, and by then it's 1/2 over.

600m - I have grown to love this distance and there is a distinctly different way I approach and run these vs the 400 or 800. You can really push it a bit and I especially like to kick on the last 200m (it then ends up being more like a 400/200 progression).

400m (one lap) - I like being able to go out fast on these, but I almost always either run them too slow, or I go out like a shot feeling like I can do it forever and then fade somewhere with about 150m to go). Still, they are over fast - so big fun points scored there.

100m - Good for strides, but I'm just too old and worried about blowing a 'hammy' to kick these out, imagining Usain Bolt next to me. I'm not a sprinter (either on the bike or track) - so I don't think I'm capable of  running these any faster than 200m.

If you're a runner and have never tried track, you absolutely should. Especially if you can find a group to do it with and someone to guide you. Since everyone can see everyone, all the time, you can ask for friends or your coach to watch you for tension sneaking into your stride. You'll get faster over time, and it's fun to run fast but get some rest time in between the repeats. I highly recommend it.

I'm also curious if my 'secretly coveting' certain tracks is a common thing, or just yet another weirdness with me.
Posted by Kevin at 9:00 PM

I covet tracks as well. (But I'm also the person who stares with envy at every runner I drive by on my way to run errands -- even if I've already run 20 miles for the day.) We run at Heritage and it's nice, but not as nice as Jeffco. Bear Creek HS is nice, too. It's got great views and it feels "open". My favorite workout is also 800s, but I also like ladders where I work down from 1600. We used to do a 200s workout where we'd jog across the field back to the start for recovery. That was kinda fun, too. It's all good!