Ok, so I didn't intend things to get like this. But they have. I officially now have 6 pair of running shoes. In all fairness, I need to point out three things:

1. I do 90% of my running in just two pair.
2. Each pair actually has a special purpose for it's existence.
3. It's not like I went out and bought this many pair off the rack. Some have been demoted, some I got a smokin' opportunistic deal on.

So - from left to right;

Brooks Defyance - These are my 'go-to' shoes that I run most all my runs in. They are the newest of the lot, and the ones that because they get used the most, rack up the miles the fastest, and get replaced most often (about every 10 weeks). They were what I went to when Pearl Izumi stopped making my previous model (Cruise), and I was forced to spend an hour trying about 10 different models on to find a replacement line. I actually like these better than the previous Pearl Izumi's. They are lighter and just feel 'springier' when I run. Very comfortable on the long runs too!

Brooks ST Racers - My track and racing 'flats'. They actually have a bit of cushioning and are meant for distance racing. I love these too. They are so light and quick. I feel fast in them.

Newton Motus - These are a specialized shoe from a company in Boulder that emphasizes natural running form. They are quite expensive (around $175), which has prohibited me from buying them in the past, but I had been wanting to try them out since I saw them at the Boston Marathon expo a year and a half ago. My massage therapist had bought these and the Saucony minimalist shoes, and they weren't working out for him at all. So he sold both to me for $20 / pair. Smoking deal. I like doing shorter runs in these. They provide an interesting 'feel' and help me really focus on a good neutral stride.

Saucony Kinvara - Saucony has this minimalist line. These are smack in the middle. The 'very' minimalist shoe is the Hattori, which looks like a water shoe you'd wear windsurfing or something. 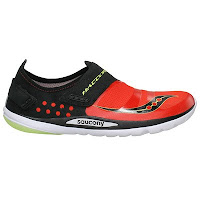 The model I have (4th from the left the collection above) is still pretty minimal. There is no pronation control (I'm a pretty neutral runner anyway), and very little sole between you and the ground. I really love  going out for short, easy runs in these on dirt trails because you can feel all the little rocks and terrain undulations on the bottom of your feet. It feels like a foot massage and I like it for recovery. If I run longer than 6 miles or so, I get little tweaks in my feet and ankles here and there, so I keep the runs very short. I've always loved the entire 'look' of the Saucony line, but they never really seemed to fit my stride very well, regardless of the model. I play around in these, but they aren't for any serious running. Again - at $20, they were a deal and I get my money's worth.

Pearl Izumi Cruise - These are the <sniff> last model of Pearl Izumi's I had. Probably went through like 10-12 pair of the Pearl Izumi line through the years. I had felt these were really great until I started running in the Brooks. Now I'm a Brooks guy. They just felt that much better. With change, sometimes comes something better. This last pair of Cruise's are pretty worn out at about 400 miles (generally I get shoes to last longer, but these didn't. Maybe too much running in the rain. Now they are retired to being bad weather shoes for maybe another 50 or 60 miles. Short runs only. Of course now my Brooks have gotten some miles on them and aren't 'pristine' enough to keep out of the elements - so these will probably get relegated to my 'gym' shoes.

Pearl Izumi Syncro Pace III - Like the Cruise above, these are long past their lifespan. I used to run in these more supportive shoes prior to re-working my stride (when I over-stride, I pronate a little. When I land my foot underneath me properly, I run pretty much dead neutral). I keep them because they have a special 'custom' modification. If you look at the sole, you'll see a bunch of sheet metal screw heads. This is for traction when running on hard packed snow and icy conditions. I read about it in an article a while back and last winter decided to take an old pair of shoes and drill in a bunch of sheet metal screws. It really works! And the extra support helps on the snow - so I'll keep 'em around for that icy day here or there. I also have a pair of Yak Trax that are the shizzle for running on 'non-icy' snow conditions. They fit right over any pair. Together, they keep me running when the weather gets lousy - which doesn't happen all that often here in Colorado!

Anyway - there you have it. I told you there was a rational explanation for my collection. And at least I'm still about 2700 pair away from this lady!!

It's Imelda Marcos - remember her? I think she's still in exile and now a store clerk at Nordstrom at the Mall of America. Ok, she's actually out of exile and part of the Philippine Legislature as of 2010.

I don't know if she runs. Probably not. 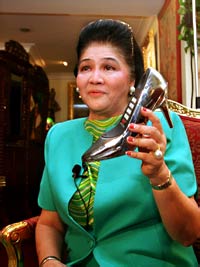