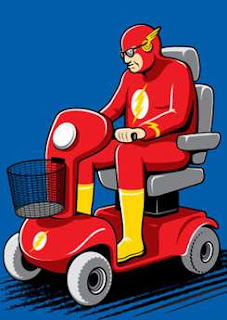 This past week has been a recovery week from The Denver 1/2 Marathon.

You'd think athletes would like recovery weeks. While it's nice to have a breather after a hard race, and all the training and prep leading up to it, there are the psychological post-race blues that pretty much hit you the day after the race and last for a few weeks.

Some of those blues are purely psychological, much like post-Christmas blues. There is all this build-up, excitement, planning and then 'poof' - it's over.

Some is psychological, but rooted in the physical way you feel. Because a runner runs progressively less and less in the 2-3 weeks leading up to a race (called tapering), the days before a race are the best you generally feel all year. You're not tired from a tough run a couple days prior, nothing aches and you have all this excitement flowing through your veins for the race to come. If you've done your taper properly, then you are literally bouncing off the walls in the starting corral. And when the gun goes off, you feel strong and confident - like a rocket that quickly winds up to cruising velocity.

After the race, the endorphin have kicked in to give you that 'high', which carries you pretty much until the next morning. Even the soreness / tiredness that creeps in later in the day feels good.

But the days following are pretty crappy, amplified by the alpha-human way you feel on the starting line. You're so amped up psychologically, spilling over with glycogen stores and adrenalin followed by an endorphin chaser. No wonder racing feels like an addictive drug.

And like any good buzz, there is a hang-over (generally proportional to the high). Post race-drug is no different. Paces that you could hit without even breaking a sweat are now laboring. You feel sluggish and flat (and sometimes 'fat'). You have these moments where things quicken and loosen up, but then the next day you are struggling to not shuffle during a recovery run.

You also know that you're at high risk of injury, so you shouldn't push. And you're reminded of the fact that you're very susceptible to getting sick because generally you feel that constant crappy feeling that precedes actually getting sick - even if you never actually *get* sick.

The longer the distance, the longer the recovery. I once read a rule of thumb that said you aren't 100% until a number of days after the race equal to mileage you raced (e.g. ~2 weeks for a 1/2 marathon). I don't personally think that's linear across all distances, but it's surprisingly close for me.

I'm really not trying to whine here. I've been through this enough to know the drill. I can talk myself through it, knowing that it's part of training / racing and that I haven't actually 'lost' any fitness from this past race. I've also got a final big race on the calendar in less than 8 weeks (with a Turkey-Trot 5K probably tossed in there as a tune-up) - and that really helps cushion the landing on the post race blues.

In fact, I didn't really have a point to this post other than to share my whining. It's cathartic - and I seem to have some extra time on my hands in these 13.1 days of recovery :-)