My buddy Chris and I originally took the day off today to go snowboarding. But sometime last weekend he texted me with the weather report for Wed. Sunny, no wind and mid-70s - and asked if I'd be up for doing a road ride instead. That seemed like a plan to me.

We started out at about 10:30am this morning. That let both of us catch up on some work related items prior to heading out. I didn't even take my phone on the ride.

The loop took us out Bear Creek Trail to downtown Denver. It's a slight downhill along the Platte River Trail, and we made decent time to the REI downtown. 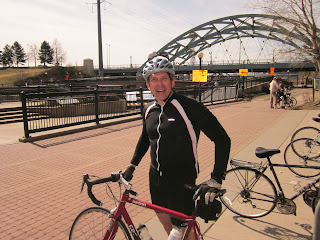 Refilled water bottles, bathroom break and then down the Cherry Creek Trail all the way to the east side of Cherry Creek Reservoir. That's a little uphill and into a bit of a light wind - but we kept a good pace, talking about this and that the whole way.

Riding through Cherry Creek park, we were side by side talking. I looked behind me prior to falling back single file and am glad I did. A fairly 'unstable' looking dude had latched onto my rear wheel and was drafting. Rule number uno dude - if you're gonna draft, let the person know when you are there. Especially hairy is the fact that I'm there, sitting up on the bike, pointing around, riding no handed - and this guy is drafting the whole time. That's not a good idea. Anywhoo..

We then snaked our way from the reservoir to the 470 bike path. It's not all that trivial as the technology park you go through has a lot of twisty roads all named the same. My biggest memory error of the route turned out because they had built a WalMart right in the middle of the road I used to cut through. But after a quick iPhone GPS check, we were back on track.

The 470 path is a nice downhill for the most part heading west. We had a pit stop at Krispy Kreme where Chris filled a water bottle. I was surprised when he walked out that he had passed on the doughnut.

Once we got to Chatfield, we turned north to head the 4-5mi up the Platte to a place called The Platte River Grille. It's right off the path and is a great sports bar that has a good selection of beer and decent food. They also sponsor a 7mi race that I did earlier in the year and a few close friends and I have taken to meeting there on a regular basis for after-work beers.

After convincing the waitress into letting us haul our bikes onto the deck, we sat down for some much needed lunch - big smothered burritos and 32oz beers. It was sunny and warm and I was actually feeling pretty good with about 60mi under our wheels. 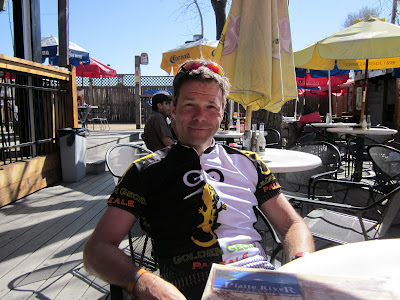 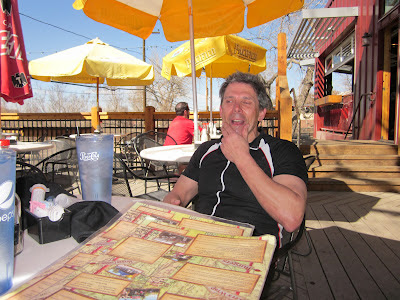 It was tough to haul ourselves up and saddle up again. I'll also make the point that the quality of your bike handling skills diminishes a tad when you've had a 32oz Agave Wheat beer. In particular, the estimation of turning radius through the traffic circles tends to stray a little wider than normal. But it was easy bike path riding with very little traffic, so no harm, no foul. I did have one incident on the path cutting back to my neighborhood. I was turned around riding one handed - pointing out the parks and soccer fields to Chris, when he called my attention to some low hanging branches hanging about my head level. I managed to get my head down and bash through them, lost a little control and nearly clipped the cement wall, but then righted the bike and rolled on. He remarked, "Nice save".

We rolled back home at 72mi - somewhere in the 4:30pm-ish time-frame. We sat around waiting for Paige and Luke to get back, AirPlaying joke cycling videos to the TV. Here's one of the favorite ones:

"I Crush The Sunday Ride"