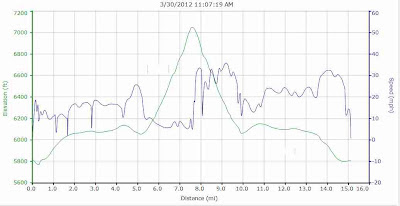 Friday's are typically listed as a 'DAY OFF' on my training schedule. It's kind of a misnomer since I rarely take a day where I'm a complete couch potato for the day. Usually that only happens once every three weeks or so and it's more driven by a need for a mental break  from training.

It's not that I'm neurotic about working out, it's just that  I always seem to recover better when I do *something* on my 'off-day'. One of my best 'somethings' for running recovery is bike riding. Many weeks I'll commute to / from work on the bike. That's a nice easy bike path ride for the most part - although occasionally I don't stick to the plan. Like when I spot some Goo-Stick wearing a full Garmin team uniform or a polka dot KoM (King of the Mountains) jersey dropped down in the aero bars of his Cervelo up ahead on the bike path.

Yeah, I'm chasing down and dropping that poser as a matter of principle alone.

But for the most part - cycling is great recovery. Today I'm down in Albuquerque with the family, and since my work commute today consisted of walking from the kitchen, down the hall to my father-in-laws home office, I decided I'd go out and do a lunch ride on a route I've been eyeing for a while now.

There is a really cool forest service road I've seen snaking off into the Sandia hills that I've wanted to explore for a year or so now. It's narrow and from the looks of Google maps, has some gnarly little climbs, twists and switchbacks along it's 2.3mi paved length. Here's what it looks like from Google Earth as you first start up it - doesn't it look inviting? 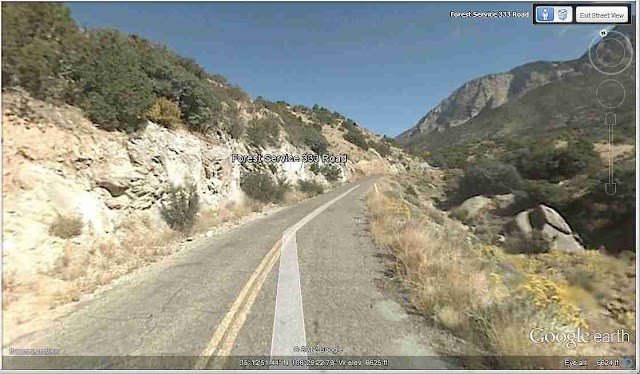 Well today was the day. Round trip from the house, it's about 16mi to the top of this forest service road and then back home. But that really doesn't do the route justice unless I add in the following statistics: 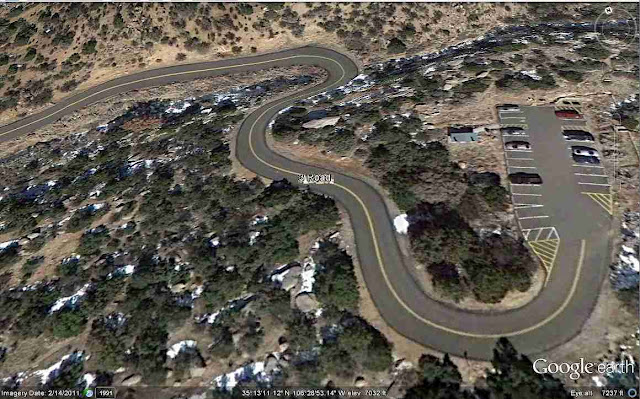 The decent down was kind of hairy. I was worried more about coming around a corner and whacking a coyote that had strayed into the road. I feathered my brakes out of that fear all the way down.

Total round trip time was an hour - perfect lunch-time ride. And I need to do it again - this time with a camera to catch some of the views from the upper parking lot.
Posted by Kevin at 2:20 PM

Like the new blog layout. We were on Sandia Peak on Wednesday. We saw lots of cyclists on the way. It's beautiful, for sure.