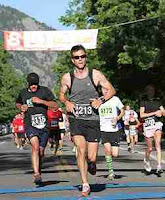 I ran my second Bolder Boulder this past Memorial Day. I felt I ran a strong race. I did some race planning so I knew where the recovery downhills were and stayed 'present' in each mile, especially on the places where I could make time. Set up for the turns well (except for one) and stuck to my pace plan.

That put me 6th in my division (vs 15th last year over about the same size field).

Boulder is one of those races that I had wanted to run for a long time, but something always came up.

It used to start in front of my apartment complex when I was going to grad school at CU back in 1987, but I wasn't a runner then. Then over the years, I always thought, "Wow, that would be such a cool race to run" - but I just never seemed to make it happen.

Finally last year I ran it - and I absolutely loved it. It's such a well run event and the course is lined with really energetic spectators. And I freakin' love the course. It's a hilly course with a net elevation gain. One of the most brutalizing hills is the final climb up Folsom to the stadium entrance. I know this sounds sick and wrong, but I love an uphill racing finish; cycling or running - it doesn't matter. I like it because it thins the herd. You find out who really wants to suffer for it.

I know I left it all on the course, because coming around that last 200m on the track in Folsom field, I was getting pretty worried about hurling. I passed the finish line and hung over the rail with about 4 other guys; dry heaving. I held it together - which is better than some of the other guys that were grabbing garbage cans and tossing cookies. I just kept my head high, breathing in fresh air, thinking of butterflies and grassy meadows - like yawning, yacking seems to be contagious. I suspect there is a lot of yacking going on in those early waves.

Thankfully, the other sights and sounds of the race are a little more pleasant (well, except for a couple of guys running in Speedos). There are folks dressed in costumes (both in the race and spectating). There's the slip and slide (which one guy from my wave deftly dove through and popped up running without missing a beat - we all cheered), and the spectator on the first real hill that tempts runners with the bowl of Doritos, insisting it's perfect racing fuel (I didn't see any takers).

The only downside is that my wave goes off pretty early. It's the second wave and goes off at 7:01 - so when we get to the stadium, it's not as packed as the later waves get to see - I think there are like 90+ waves). But it's nice to get done early in cool temps and no wind. Perfect racing weather.

That afternoon, Paige and I slipped out for a pool swim. Man did that feel great - but not as great as the celebratory margaritas that night! Nature's pain killer.

Next up is my first triathlon this Sunday. I feel ready and am pretty excited!! I even already signed up for another one on 6/30 - and yes; it has lots of hills :-)))))