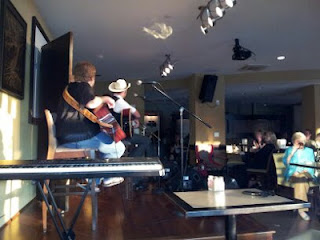 So this is a first (for me blogging). I'm writing this from a table in a bar in Nashville, TN. Out here on business, working on a presentation for tomorrow...but..

This is Nashville, TN. If you ever want to see the MASSIVE level of talent in the US in the music business - come out here and spend some time. I'm in a little bar / restaurant and the vocal abilities of the folks on stage completely waxes anything you'll see watching 'The Voice', 'American Idol' or any of those packaged shows. The one lady just announced that she just won a Nashville Music Vocalist Award.

Went out for a run when I landed. Started out with the intent to do 12mi. Ended up doing 14 with a bunch of tempo work. Even with the heat / humidity - running down Music Row past the studios and downtown across to the Shelby (?) trail and along the river. Whoah - I was just so freakin' geeked. I'm a long time guitar player / mediocre singer-songwriter style pop vocalist / recording studio wanna-be. I've done open-mics and small gigs here and there - but then you come out here and.... whoah.... I mean this is one little crappy bar, in a city of a ton of little crappy bars.. and these guys are awesome.

So - good Masters Swim this morning before I got on the plane. Respectable run / pacing work in the bag. Couple of draft Blue Moon's (my anchor to Colorado / Coors), and a decent salmon / baked potato / salad dinner. Good live country music...  This all on top of a confidence building session in open water on Monday night and a kick-ass BRICK hitting some decent paces off the bike on Tuesday. Put that together with my wonderful wife and kids...

Holy crap, I have a happy life. Don't worry - be happy.

btw - this was waiting for me on the bed when I walked into my hotel room. It's (I assume) a swan made out of bath towels (although my initial pattern recognition put it as more of a cobra, ready to strike).

I know it's supposed to be soothing and add a touch of something - but it just kind of freaked me out. I dismantled it immediately. Die swan!! 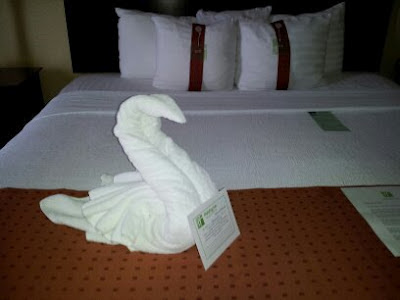 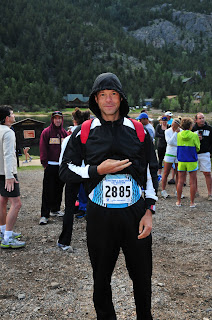 Ran the Georgetown to Idaho Springs 1/2 Marathon this past Saturday.

I love this race and love the distance. It's long enough to fall into a rhythm and also test you, and the pace is between that marathon and 10K speed. Hurts, but is manageable.

It's billed as a net downhill course, but I've made the points before about it of why it's a little deceptively tricky. First, it starts at about 8300 ft and the first 2.5 miles actually send you back into the town, up and down some hilly streets. Second, there is a 1.5mi section on dirt road and trail that can be a little tough, especially since that comes around mile 7 or so and you have to watch your footing on the  rocks, sand and ruts. Finally, in the last mile there are some rollers through Idaho Springs at 7300ft that you have to mentally push through when tired. You also have to be a good downhill runner to take advantage of a downhill course. I finally feel like I'm getting there, but am always reminded on this course that I still can improve.

That being said, it's a fast course and that brings out a decent field. About 2560 racers this year.

The weather was perfect. Nice and brisk, but not too cold at the start. This is my third year running the race, so I knew I needed to stage up front. Otherwise, you can get clogged up going back into town at the start, and then you spend too much energy running off the side of the road and weaving to move forward and keep a good pace. In a half, you don't have lots of distance to make up easy time at the start. It runs more like a 10K than a marathon.

I was really happy with the start, my overall pacing and being 'present' mentally through every mile. The last is something I've worked on over the years. Otherwise I tend to drift off pace and miss out on key places in the race when I could have gone faster. And I was strong into the finish, passing a couple folks on the last couple turns. 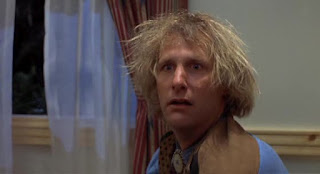 The downside in the race was that I had some GI issues that crept in at about mile 4. It got progressively worse and at some point there is that realization that a I'm not going to be able to just run all the way through it. You know that moment in Dumb and Dumber where Harry (Jeff Daniels) is driving in the car for his date with Mary, and he first feels the effects of Floyd's (Jim Carrey) sabotage (Floyd put a whole bottle of 'Turbo Lax - use one teaspoon for fast and effective relief' into Harry's hot chocolate? Yeah - that feeling was happening by mile 5.

So I sped up a bit and planned pit stop at mile 6 (hoping they had porta-potties there - they did). At mile 6 I ran into one of them and a minute and a half later was back out on the course - much better. Mental note, no more big burrito for lunch the day before. Need to really keep things bland and light all day prior. Ah well.

I then picked up the pace to pull back the lost time. I don't think a 1:30 stop has to translate to that amount of time lost if it happens with 6mi to go because it gives you a little recovery time and you can always run a bit faster for a couple miles. Maybe it cost me 45s net lost time? Anyway - lesson learned.

My finish time was 1:27:49 - which was a PR for me (both 1/2 marathon and on that course) - by about 1:40! I was super stoked by that! It's a fast field in my division though. Even though overall times were slower than last year, there were some fast guys (I know many of them by name from other races) in my division. The above time would have put me 4th last year - this year I was 8th (out of 125 guys). I was 84th overall out of 2560 racers. Happy with that with my 49th birthday coming up! Nice to be PR'ing as I age :-)

Saturday night we headed out to Hacienda's for my favorite post race treat; Chicken-Changa and a big house margarita!

Ah, but to finish off my Dumb and Dumber day, I cut my finger while making some home made tortilla soup. It was a decent slice. I put a band-aid on which stopped the bleeding, and even swam later in the day. Doesn't hurt, but when I took the bandaid off last night, it still bled pretty well. I went to Urgent Care more just to make sure it didn't need stitches (I didn't) and to see if I should get a tetanus shot (I did). But they apparently wanted to give me a 'money's worth' bandage. Look at this puppy! 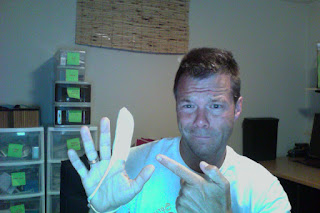 Last night I took some time to set up my new TT bike. Here's the steps I went through:

1. Put the bike on the trainer and leveled the front wheel.
2. Adjusted seat and aero extensions by 'feel' based on past experience.
3. Video taped me riding both on the 'horns' as well as in the aero position.
4. Then I pulled the video into V1 Home Premium (which I've had for a while) and took a snapshot from the video.

side-note: V1 is great software. You can upload video. Run it at any speed, frame by frame, forward and back, draw lines, angles, and compare side by side to other videos. You can even download models from a variety of sports. http://www.v1golfacademy.com/v1home.asp

5. Uploaded into TriRaceBook (www.triracebook.com) and used the position tool to set each contact point (per their online video tutorial). You can see the result below. 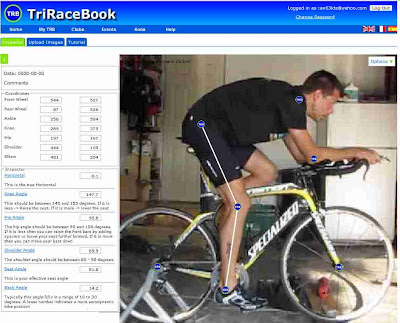 Analysis was pretty much what I figured. I had purposefully set the seat a bit lower than I think it should be at so I could get used to the steeper aero position of my back. still puts me in a decent position, but it's lower than I'm used to (on the road bike) and it creates a bit more elbow angle than would be optimal (closer to, but not at 90 degrees). But higher and more forward is something I need to work towards over time. Need to let the body adjust.

After that I went over the whole bike with a torque wrench. was happy to see that the previous owner had kept the bolts to spec. Always a concern on a bunch of carbon components and frame!

Here's some snapshots of some model aero positions. Sagan is closest to my build (he is 6' / 160lbs, I'm 1/2 inch taller and 164 lbs), Cancellara is close to my height. Cadel is shorter, Wiggins is taller. 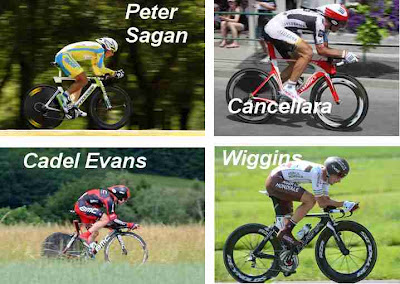 And of course there is Lance's new position: 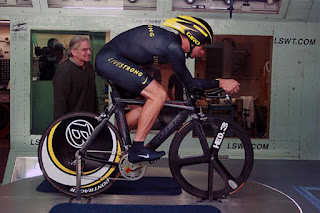 I've always noticed that in the 'lab' setting, the riders are further back on the seat, but they tend to edge out on the nose of the saddle in the heat of the race. I also think TT riders tend to ride with a lower saddle than triathletes - but I need to look into that further.

Anyway - at lunch today I took the bike for a ride through Bear Creek. I was really happy with the setup. Just tweaked the bar extension length by 1/4" while on the ride.

Now going to pretty much ride the TT bike exclusively until the Bear Creek triathlon in early September. Should give me time to adjust and make some tweaks to the setup. Next year I think I'll throw on a nice set of race wheels. The HED Jet 5 Express are currently in the front running. They have an AL rim with a carbon wing bonded to them. I'm just a little worried about the carbon clincher issues that have sprung up recently - where some races have even banned them. With the hilly courses in Colorado, it's just better I think to have a rim that's not going to go kaboom from brake heat build-up.

Haven't come to terms yet with wearing an aero helmet. I'll get there.... :-)

Oh yeah - why do I have this much time to spend on my bike setup, analyzing TT positions and wheel set selection? Because the Georgetown 1/2 marathon is this Saturday (and I'm going bouncy crazy in taper mode - i.e. less training load). Wish me luck!!