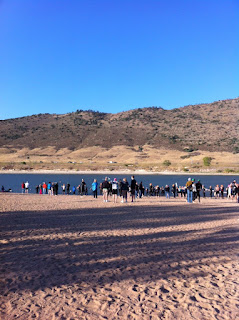 Last triathlon of the year - and the bonus was that it was in Bear Creek park. The entry to the park is only a mile from my house, and the start at the lake was only another 3mi into the park. Perfect pre-race bike warm-up - although riding a TT bike with a 20lb transition pack feels a bit sketch on the downhills into the park!

The race is a sprint distance (750m swim / 20K bike / 5K run). Right now my biggest constraint is the swim, although let me say something about short distance races - (bike TT, 5K runs, 10K runs..) - they hurt.... allot! You are basically red-lining the whole time. Especially on the run - you just so want it to be over. But more on that in a bit. First things first:

Good recap and great race! I am looking for recaps on this one because it's hard to tell from the site how hilly it is...

This race is under new management this year (Racing Underground - who are awesome btw). The bike course is changed - a bit more hills. Best advice is to check out the course map and go ride it. The hills are really not bad - although that's relative I know.

The run course is about the same. Slight climb out, slight descent back.