My Most Nervous Race - EVER!

Last Sunday, neither Paige nor I were racing. We agreed though that we were more nervous at the start of this particular race than we had ever been for the start of any race in our lives.
Yep - this was Luke (our newly minted 5 year old's) first race at the Kid's that Tri Duathlon (1/4mi run / 1.6mi bike / 1/4 mi run). 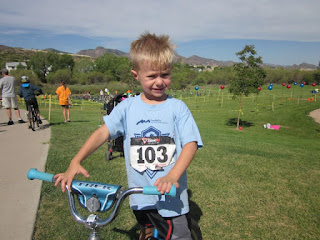 First, let me say - the kid has been training. Last weekend I took him to ride the 1.3mi loop around a local lake (which he did twice). Then he got off the bike and said to me, "Ok, now I need to run" - and headed off down the path. He's done this several times now. I suspect if he could write, he'd have a training schedule all worked up for his weeks leading into his big race.
On race day, he didn't seem nervous until the kids were all lining up. They age group was 5-7 year old, and he's not a huge kid to begin with. Toeing up on the line - he just looked so small. And I could see in his face the nerves setting in a bit.
I had decided to run along side him for the race. I kept my distance in the opening segment because all the kids went out like bullets. Pretty quickly they settled back into an even pace on the first 1/4mi out and back.
Going into T1, he was pretty self-sufficient getting his bike and snapping on his own helmet. He started to mount to ride out of transition and I had to remind him to run to the mount line first. He still mounted a bit early - the ref just smiled at me. Not many penalties handed out today :-)

On the bike I was glad to be running next to him. His bike is a 12" wheel bike - no real match for the 'big kids' bikes hauling along. So at times he was out there all alone. Sorry - I'm an over-protective parent and there were a couple sections of the path where a wrong turn could have sent him down a pretty steep incline and into the lake. Plus, it was nice to keep offering words of encouragement - mostly, "I'm sooooo proud of you!" 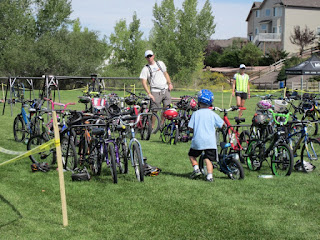 On a couple of the downhills, he was hauling along. I had to put out more speed than I would have thought to keep up with him. Estimating somewhere around my 800m pace (which is around 10.6 mph). I did a quick calculation - that means his little 12" wheels were spinning at about 300 RPM! (this is about equivalent to my road bike going (I think) about 24mph). 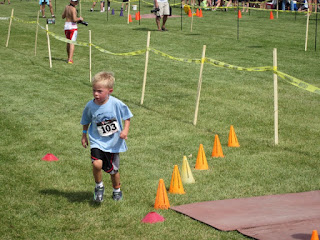 Coming into T2 he was visibly pretty tired, but man the kid just pushed through it. I was really so proud of him on his final out and back run. As he ran into the final 50m, I peeled off and a couple of the older kids ran next to him to carry him across the finish line. He was on cloud nine crossing that line!
Luke then learned the best part of the race - heading to the food table. And man, that kid got his money's worth. We were cracking up at how much he was chowing down and drinking.

So what was his placing? 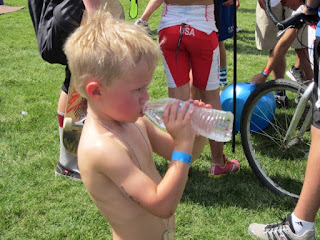 Well, if you look at results it becomes apparent that the 7 year olds dominated with finish times about 2x faster than the 5 year olds.

Kids were pretty well distributed by age as you'd imagine. Luke was 4th (out of 7) other 5 year olds in the race - they did one set of awards for the whole group (5-7) so he didn't podium ;-) but he was pretty happy to win a gift certificate to Kompetitive Edge (local tri shop).
Paige and I were just so proud of our little racer! I don't think it ever even occurred to him to quit.
.
Needless to say - he crashed hard that night and slept like a rock!
Posted by Kevin at 7:00 PM