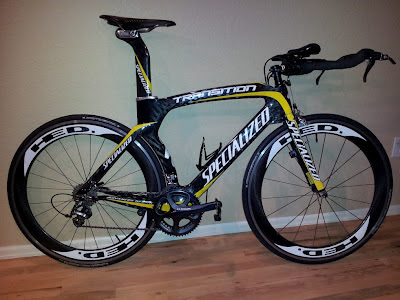 So I finished the key upgrades to my TT bike tonight. Here she is.

I found the wheels on Craig's List - was actually looking for a bike for Paige and stumbled upon an ad for a Cervelo P2 (which ended up being too big for her). But the guy was also selling the wheels separately.

They are HED Jet 6's (2011) and barely ridden. I actually couldn't even find any wear on the braking surface. Guy said he had less than 100mi on them. Negotiated a bit (hey - it's the end of the season and I wasn't in a hurry). Ended getting them for about 1/2 of what a new set would have cost me. With the saved dough, I decided to upgrade the shift-clunky 105 to Ultegra 6700 (actually only had to upgrade the crankset, BB and chain).


So here are the full specs:

Got to take it out for a 20 minute test ride just before dark and I have to say it is SWEEEEEET!

Shifting is nice and smooth. I also took a couple links out of the chain which improves the shifts and eliminated the chain slap. Yeah - you can't cross-chain, but uhhhh... yeah.... you should never do that anyway.

Can't wait to put in some serious training miles on it and of course race it next season. Not only in triathlons, but also planning to do some TT races. Yeah - the little wings behind the fork are not UCI legal - but I've asked and the refs say they aren't that picky at the races and I can ride those as is.

Oh, here's an assignment for you. See if you can spot the rear brake. Thaaaat's right. Here's a picture of a Shiv (which has the same brake position).

I will tell you it a sheer pain to adjust it especially the drive side pad.

btw - over the weekend I had thrown the wheel-set on my road bike and took them for a 30mi spin. It was a bit windy out, so a great test. Definitely feel them at speeds over about 19.5mph. It's hard to explain, but you feel the front end just get 'lighter'. On one stretch where a 'strong' effort puts me at about 21-22mph, I was pulling 23-24mph with the same perceived effort. In a strong cross wind coming back they are interesting. You feel the wind pushing the front end around a bit, but you also feel the sail effect - like the front wheel is lying on the wind. It's pretty cool - but you have to pay attention.
Posted by Kevin at 8:21 PM