So I went running for the first time in Chennai, India the other day. It was a trip. 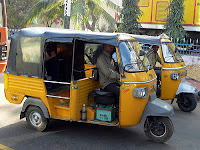 Running in India would be level 11. You know that level where you battle the Volcano Lava Monster with nothing but a battle axe while monkeys through balls of fire at you from the cliff sides. Yeah. It's like that.

Not only does the traffic drive on the 'British' side of the road (kind of messes with your trajectory estimation skills), but vehicles don't slow when they almost collide like in China. In fact, they generally speed up. It's like the driver of the car / moped / motorcycle / bike / Tuk-Tuk (3 wheel vehicle) perceives that there is a chance they are about to collide and their response is, "Screw it" - and they speed up to go all in.

Like China, traffic is like being at the business end of a particle accelerator. Only instead of quarks and leptons (which I think have no mass), you are dodging stuff that has quite a bit of heft in addition to moving in  completely random directions at a variety of ever changing speeds. If I recall, existing at the quantum level you would see particles popping in and out of dimensional existence too. I swear that at least once a moped appeared where none existed just a moment before. At least that's what it seemed like. Toss in some stray dogs, roosters and cows.... yes.. in the city.. and it will test your peripheral vision skills to the max.

And there are monkeys too. You heard me. And although they aren't throwing flaming lava balls at you, having one screech in your ear from a fence while you run by can upchuck your concentration - especially if you're not expecting to see a monkey. The first time I looked over and saw this little simian bastard staring at me - it freaked me out. Up until now, the only time I've seen one is at the zoo.. behind some glass.  All I could think of when I first saw one was that old Pink Panther scene. I don't know why.

Anyway. Here's some video of the traffic scene here - from the safety of my car. The video doesn't do it justice. And keep in mind, this street is a major road with barriers to keep everyone in line a bit.

Don't get me wrong. I love adventure - and I'm glad I did it. But for the rest of my trip, I think I'll stick to the hotel treadmill. To the best of my knowledge, nobody ever got whacked running on a treadmill.

Or got assaulted by a monkey.

Having a great time with my colleagues out here though. I absolutely cherish the opportunity to travel and learn as much as I get to in my job.  Here's some pictures from today... 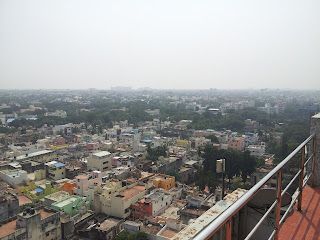