Fit the new, zero setback post into my TT bike. Makes a world of difference. I don't know who these guys are that need that much effective reach that comes with the standard setback post - but I'm not one of them.

Did a bit of video analysis - below. Saw that the leg extension may have been a bit too long (it's right at the 155 degree limit, but then again, the pedal stroke is smooth with no acceleration of the knee at BDC and my hips are rock solid) - but decided to drop it by about 8mm. That may be about 3mm too much at this point, but we'll give it a few rides. It's getting pretty darn close. 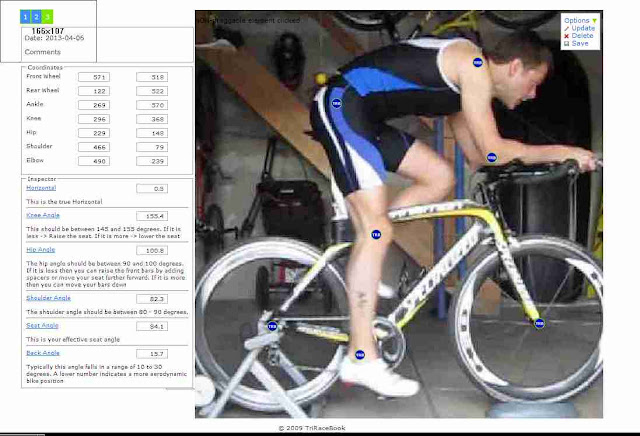 I was initially concerned about the 'toe drop' which usually is indicative of too high a seat. But I searched out a bunch of videos of pros doing warm-ups for TT on the trainer and every one of them drops the toe on BDC - I think it's because TT puts you so much more forward.

Anyway - real test today was in the form of a 54mi ride at a decent pace. Felt awesome on the aero bars and spent probably 90% of the ride there. Then did a 4mi MAFF (solid aerobic zone) off the bike and MAN could I tell a difference from trying to run off the road bike. The TT bike totally saved my running muscles and I felt like a million dollars.

I will say that for sure the TT bike does NOT corner like the road bike. Had a few 'whoah' moments trying to press a corner tight. Part of it is the front wheel - the HED's use a really wide C2 Al rim and I think there is just a bucket load of rotating mass coupled with some incident wind gusts that made the front end feel like I was about ready to lift off. However - I totally recommend the HED Express series. That wide C2 rim allows you to ride about 10psi lower air pressure because it's so freakin' wide (i.e. more air volume). And that just makes the ride so plush.

Conti 4000 race slicks though are the bomb. Smooth as silk and not the classic Conti squared off feeling on the corners. Great tire profile. Not so good on gravel though. Did a little front wheel slide coming down a street crossing sidewalk ramp. Good thing I used to practice those front wheel slides on the Mt. Bike. Still, it's a little disconcerting of a feeling. In general, this setup is great at going straight ahead at mach schnell.

Afterwards did a long walk with Luke. And now of course a well deserved adult beverage. Booyah! 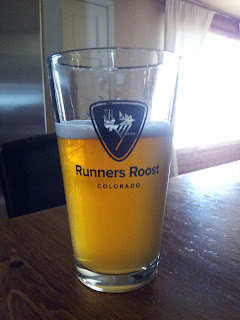