I was at a business conference, talking to a fellow competitive triathlete. Another colleague that I hadn't seen in a while wandered up to say, 'hello' and kind of caught the middle of our conversation. He remarked, "Man, I don't know how you guys do it. It's so hard to get on a regular exercise program. Just so hard to get out of bed that early"

The first guy and I exchanged grins and I remarked, "You know. It actually doesn't get easier. It still takes as much resolve to roll out of bed and go to the pool, or head out in the cold rain on a run. But after a while, you just get in the habit of ignoring that inner, sane voice. You go through the motions without allowing those second thoughts to creep in. You learn all sorts of tricks to get yourself motivated (like The Sarge). And once you're out for 15 minutes... most times.... you're glad you pushed through"

Along the same lines, I go a little wombat shit crazy when someone says to me, "Wow, you can eat anything you want and not gain weight. It must be nice" - Uhhhhh..... excuse me, but I have that Slavic blood running through my veins. We are not by nature little spindly men. Left to my own whims and fancies I can balloon up quite nicely into the deuce double naught range.

I once read a good analogy. Race car engines are fast and well tuned machines, right? Do you think you can put junk gas into them? The truth is that trying to be an aging athlete, I have to pay MORE attention to my diet than if I was just slugging around. But again, it's about resolve. You build good habits just like you build bad ones. Repetition and teaching yourself to tolerate things like hunger and cravings makes you stronger.

Why am I lamenting about this? Well, I'm trying to drop 4 lbs more in the next 2 months to get to 'race' weight (about 162 lbs on my 6' 1/2 inch frame). I'm not claiming it's a healthy weight. It's more functional and sports specific - especially in the hills of Colorado. And it is freakin' tough to do. Your body wants to hold on to those last few 'fat' pounds.

To do this isn't easy. I'm already at my body's volume limit of training, especially given the emphasis I've been putting on quality workouts. So no more calories to be burned there yet. Instead, I've started tightening the screws on the quality of nutrition and timing my calories. And the cravings have also ratcheted up.

What do I crave? For one, I crave waffles. A big plate of 365 flax waffles piled high with strawberries, banana, walnuts, some coconut flakes and maple syrup. That's right. You heard me. I LOVE maple syrup. Not that cheap synthetic crap either. I'm talking the real deal. Like hammer a spigot into a Vermont tree and bleed it dry.

It's been about 2 months since my last waffle experience. A couple weeks ago I took one waffle and spread raw almond butter on it with just a drip of maple syrup before heading to the pool. It wasn't the same. It was cruel.

Like that scene from Silence of the Lambs where the Senator's daughter is in the well and can only see the light cresting over the edge while that mangy little white rat dog (Precious) yaps at her.... Ok.. maybe I'm being a bit melodramatic. Now I've gone and freaked myself out.

But my craving for waffles have caused me to recently start looking at things differently. For example, recently I saw this in a cycling trade magazine... is it just me.... or..... 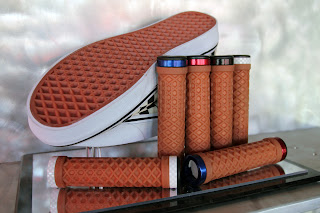 Anyway. Where am I going with all of this? I don't know. But I know I'm having waffles sometime in the very near future. I don't want to end lured into a deep dark well, gnawing on bicycle hand grips.

And as much as I want to make race weight and go faster, I'm not totally wombat shit crazy.
Posted by Kevin at 5:46 PM