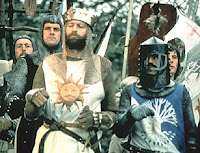 Ah yes - It's time again for the thing that athletes both look forward to and dread most. The recovery week.

That time when you back off of the training load and let your body absorb all that hard work of the past weeks. A time to catch up on sleep, let the aches and pains subside a bit, and let the body recover.

Well, that's how it's sold to us. The reality is, it's a week when:


Of course the upside is also that we have lots of energy for other things; like reading training articles, wandering around bikes shops and running stores, eating things we shouldn't, and being the recipient of that silent awkward stare when the office elevator doors swish open to catch you practicing your swimming 'catch'; Which of course had to be practiced at that exact moment because:
Naturally the folks staring decided to wait for the next lift.

Another thing that's fun to do is to spend all day searching for coverage of the Giro d'Italia (hint, go to the BBC, The Guardian, pretty much any publication that is NOT American). Case in point, here's how you find it on the NBC Sports homepage:
By the way. What the heck is up with 'Outdoors' being substituted for 'Hunting & Fishing' - the only two sports in that category. Why not just have that as the menu item? Your guess is probably the same as mine. But I don't hunt or fish and I've got enough on my plate already getting wound up about the sports I personally care about. And after all - that's what this is about. Me and my personal needs.

Yes, I get it. It's my own fault for following a sport that in the US is about as huge as ferret nipples (I have no idea), but c'mon; Saturday was the first stage of the Giro. I flipped on the TV expecting to see at least 30 seconds of coverage. Niente. There was however about 10 minutes of analysis and commentary regarding game 287 in the 3,458 games to be played in pre-season elementary school field hockey, but nothing on a race that is almost as old as the modern bicycle itself. 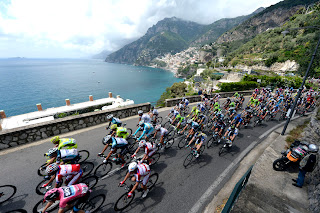 Ok, I'm done ranting. I know it leads nowhere but sorrow and bitterness - and I'm anything but today. I'm happy for the Internet and the ability to find pictures like the following to ogle after (from the Giro of course):

Back into the realm of things we 'can' afford but shouldn't, I saw an ad for 'running parachutes' today. I've seen these before, but never marketed in a way that is so distant and unreachable from reality. 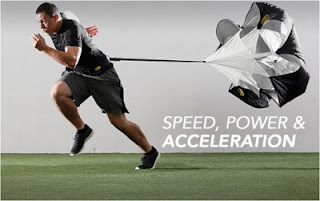 Wow - now that is good marketing. The only thing that would make this better is if the parachute was engulfed in flame - or someone CGI'd a sonic boom into the picture.

Unfortunately though, this is what the average person will look like when actually using it, among the certain baying of heckling from people gathered in the park for a Sunday BBQ. To be followed by the old drunken BBQ attendee favorite game of 'Catch the Dorky Runner and Give Him an Atomic Wedgie'.

Of course it's better than this guy - who can't seem to run fast enough to even get the parachute off the ground.

Anyway, my point is to beware marketing. Otherwise you end up with things like running parachutes, Snuggies, Shaun T. Insanity DVD box sets and Thigh Masters.

Ok - so what have I been doing productive with my recovery week? Uhmmm... how about over analyzing data from the last two weeks worth of workouts?

Quiz Time: What do the following two workout elevation plots tell you? 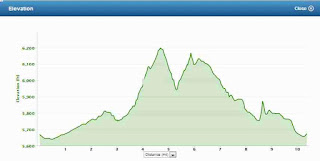 The correct answer is of course 'Bradley Wiggins and Team Sky' - weren't you listening at all to the first part of this post?

Oh yes, the above profiles were the elevation changes for my run on Saturday followed by my bike ride on Sunday. The run took some Jedi mind tricks to get out the door on. I was pretty fatigued, and it was late in the day. I pushed myself out the door. Here's what went through my mind:

Mile 1 - "...this really sucks. I feel flat and tired. This is going to go on endlessly. There are a lot of hills ahead."
Mile 2 - "...this still blows. It shouldn't blow by now. I must really be tired. I should turn back. Of course if I turn around now, it's going to take 2 miles to get home. That sucks and will be 4 miles. Four miles is almost to 5 and five is halfway to my planned 10 mile run. I should just keep going..."

I'm not kidding - that was my reasoning. It was weak, but my brain bought it.

I'm happy to say that by mile 5 I was having a blast. Things woke up and though I never felt great, I felt strong and fluid, especially on the downhill towards home. I also felt like a mental bad ass. Although given the weakness of the logic that pushed me through, it's more like a mental dumb ass.

Sunday's ride was epic and so much fun. I had mounted up a pair of my new favorite tire of all time. "Continental GP 4000 S". If you don't have these you should chuck whatever crap you're riding on and slap on a pair of these babies. It was like a completely different ride. So plush and predictable. Perfect shock absorption and stickiness through corners.

Rode from my house, up Deer Creek with the High Grade option to Conifer. Stopped in Aspen Park for a ham and cheese sandwich on Rosemary sourdough. Felt very 'Euro' with just that and water in my bottles for a 4 hour ride.
My only complaint was the descent down Deer Creek. Ok - news flash for you motorists. If the road is a 4% grade or more descent, with more than a few 15-20mph curves every quarter mile or so, and you are NOT driving an Italian or German sports car - I can descend faster than you on my bike. I can move my center of mass (by leaning inside the turn). You can't.

And if the speed limit is 35mph, and I'm doing said speed limit - then you are putting yourself (and anyone else in your vehicle or in close proximity to it) at great risk to pass me and then stay ahead of me.

Why do motorists (mostly men) feel that they cannot possibly stand to have a bike going faster than them? I've had more than one pass me - I can hear the engine rev and I hug the shoulder to help them out in this foolish endeavor - then watch as they try to make the next corner at the speed they've accelerated to. I've watched them sail into the gravel and cross the yellow, all to maintain a speed that they wouldn't attempt if not for the pressure of wanting to show the cyclist that they can handle it and didn't just do something really dumb.

And then - I end up having to brake because 'Signor Andretti' can't hold speed through the corners. He's then self conscious (or something) and tries to show me that he can stay ahead of me. I watch the listing of the vehicle through every corner, the passenger grabbing the roof and dashboard and hear the squeal of tires. Meanwhile (and I really don't care about this part) - I'm lazily banking through the corner and post braking to give some distance (and manhood) back to him. Damn, I wish I hadn't already burned the phrase, 'ferret nipple'.

Anyway, listen up. The scrawny, lycra clad cyclist is faster than you and your pick-up truck which including the gun rack and CIBIE light kit, has a center of mass higher than the crowd on the CU Boulder Campus lawn at 4:20 on 4/20. Anywhoo - I was more worried for them than for me. They passed with plenty of room, but were just going way too fast for their own good. I was having too good a day to be upset about having to brake on the descent. As one of my favorite vocalists is fond of singing, Don't worry - be happy.

Ok, so some other eye candy courtesy of Golden Cheetah analysis software.

Anyway - that about wraps up 'day uno' of my week long 'recovery'. Maybe I'll stay up a bit later and pen a letter to NBC Sports.

Pray for my sanity.