Why Train with a Power Meter 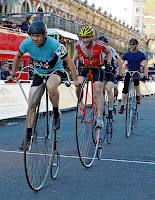 I can be 'Old School' about some things - especially cycling. I rode for years without even a cycling computer on any of my bikes. Just yanked them off one day. In Colorado the numbers are almost irrelevant. A 20 mile ride out here can be a cake walk, or it can be a brutal trip to 'seeing Elvis' and his friend 'ralph'.

It all depends on the vertical gained, condition of the trail (mountain biking), winds and of course the crew you're riding with and the mood you're in.

In running I'm a little more of a numbers guy - mostly around miles, HR and pace, although the latter depends on the above variables as well. But I certainly take a fair share of 'electronics free' runs. And usually the HR monitor is keeping my workload 'down'. Like many I have a tendency to go too hard and not work all the systems so to speak.

I used to guffaw at the geeks with the power meters. Sure, cool gimmick, but I've been riding for a long time. Surely if RPE (Relative Perceived Effort) was good enough for Hinault, then it's good enough for my sorry bum. 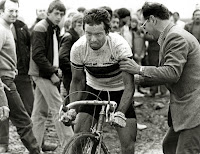 I started reading more and more about training with power (i.e. a power meter) and seeing it popping up with the regularity of GPS, iPods, Di2 and other fancy gadgets (like disc brakes ;-) on cycling forums. There are coaches out there that won't even train you without a power meter. I started to think, "Ok, if nothing else, it would be fun just to geek out a bit on some of this stuff. Time to learn more about the bike".

I had been reading Joe Friel's book Your BEST Triathlon as well as The Triathlete's Training Bible looking for help in understanding the dynamics of triathlon training and how to fit all the sports together into a cohesive plan. I really liked his writing style and found his insights straight-forward, but carrying a lot of depth in their simplicity. So one night I downloaded The Power Meter Handbook to my Kindle. I got about 1/3 of the way through it that night and was convinced and pulled the trigger on one.

I can't do as eloquent a job as Sir Friel does, but the arguments center around the simple facts that your body only indirectly experiences things like speed and elevation. RPE can be misleading depending on fatigue, mood, etc. and HR is a lagging indicator of effort. The only thing your body directly experiences is the work it is doing. It is the input to the training equation. 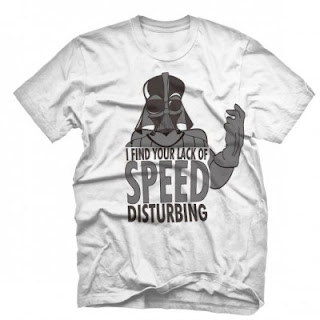 After some settling in time, more reading and finding some decent software to analyze the data, I'm getting a handle on just how valuable this thing is.

There are some useful things I've discovered:

1. The power meter has really helped me with optimizing my pedal stroke to the terrain. I can ride along at a certain RPE, then just do something like focus on different parts of the stroke, engaging different muscles, relaxing my back, and pow - my RPE drops a 1/2 point and my watts go up by 5% or so. I thought I knew what a good pedal stroke was, but it's really helped me refine and measure.

2. There's a nice little calculation called 'decoupling' that can measure your aerobic fitness on long rides. Simply put, it's the amount your HR drifts up over a long ride compared to the power your are putting out. It's a nice way of knowing whether the base is there for the distance covered. Anything below 5% is a good indicator - on my last 65 mile ride in Z2 (aerobic), mine was less than 2%

3. Another interesting stat is your variability index (VI) which measures how steady you can maintain a particular power where steady is key - like in a TT. It tells you when you do an FTP (Functional Threshold Test) how good the test was (you want to hold the highest possible watts for 30min - drifting down means you went out to fast. Mine on my last test was less than 1% - which validated the test (in addition to that's all that I had in the engine at the time ;-)

4. xPower / Normalized Power (basically the same thing, just with a different physiological decay factor applied) is an interesting statistic. It basically takes into account rides where you have lots of variability (like climbing hills or changing RPE), that the 'average power' is not the whole story. That's because there is a physiological cost associated with not running a steady power level. The metric is then used downstream to calculate (with duration) basically how 'hard' the ride was (WKO+ and Training Peaks use TSS, Golden Cheetah use things like BikeScore). This can then be tracked to see what your average training load is (I don't currently do this because the swim and run workouts have to be figured in as well and I'm not using Training Peaks currently. But it would be interesting to do that long term.

Finally - at heart I'm a scientist and engineer, and it's just fun to geek out on this kind of stuff. But as I said above, I've been surprised at just how useful this stuff is and how far off my RPE sometimes is - especially for shorter periods. For example - during a recent set of repeats, I noticed that my RPE would feel like a 7, but then all of a sudden drop down to a 6 just by taking a deep breath and relaxing. It would often drift back and forth like that throughout the repeat, even with a fairly steady wattage. The body isn't a steady state machine - it's more like swirling bucket of chemicals and neurological impulses all being measured with a lagging and subjective perception of effort. Just an interesting learning.

So there you have it. I'm a convert. Of course it's like anything else. It's just data. At the end of the day, what really matters is that you ride your bike, or run, or swim, or compete in full contact curling.

But I've found it's more than just gimmicky data. It's useful and I'm learning in a sport that I thought I understood. It's helping me put some of the pieces together about how my body works - or doesn't work. And I'm having fun.