Pre-rode the Loveland Lake to Lake course yesterday. It's a nice course, with a few tricky sections - mostly on the descent side.

It's about 29mi with about 1700 ft of climbing. Most of that climbing is probably around a 1-2% grade mostly, with a couple 4-6% short sections. Very easy to stay aero for most of it. There are a couple descents where I easily hit around 45mph - even if for a very short time. Was on the aero bars and it was a bit windy. Probably will opt for the horns if it's that windy on race day. That cross wind tweaking on the front 60mm race wheel is a little unnerving - and it's nice to be near the brakes when others are around and you're descending that fast. Loss of time anyway is pretty minimal there. Just pedal harder on the uphill ;-)

After the ride I decided to swap out my PowerTap wheel with my race wheel (HED Jet 6), so that I could get in some time just testing to make sure everything is adjusted properly in the next week. Plus, I kind of know what TT pace needs to feel like at this point.

Also needed to adjust the front derailleur mount as it was a bit loose and the derailleur was angling down a bit. Decided to tackle the rear brake because the tension adjuster on the right side wasn't working. My suspicion was because the brake rides under and behind the rear bottom bracket, that a bunch of crap had made it's way into the adjuster mechanism.

Technical Details on Rebuild of the Brake:
The brakes are actually made by a company called TRP (www.trpbrakes.com). Looks like they OEM them for a number of TT bikes - like the Specialized Transition I have.

Here's the location of the brake - looking up from underneath the BB. Thaaaaat's right. 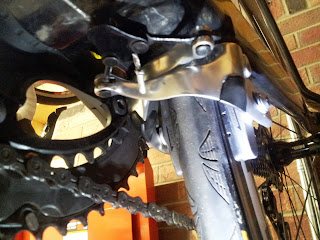 Really getting at it necessitated removing the front crank. Trust me, in the long run - you want to do that. It takes like 2 minutes to pull the crank - and a lot longer to try and work the brake otherwise.

Pulled both sides off and disassembled. It's a pretty simple mechanism - although I wish there was a better picture of how it works so I could post it. Basically there is an internal thick washer that one end of the spring inserts into with a detent that the adjuster barrel screw pushes on. The other end of the spring inserts into the frame when you push the brake on the post. Move the adjuster screw in and out and the detent puts more or less pre-tension on the return spring.

Here's a side view with an arrow pointing to the adjustment washer.

The cavity where that wash sits just collects crap from the road, causing it not to rotate smoothly. So it sticks and keeps too much tension on the spring, or it doesn't move at all. I wish had taken a picture of it while I had it apart. There aren't any good exploded views out there, but it's a pretty simple mechanism.

I basically had to spray the heck out of it with WD-40 and used a tooth pick to rotate it until it was free enough to pop it out into my hand. Then some de-greaser into the cavity and parts to clean them all up. Then greased it up and put it back together.

Reassembly and adjustment of the now smooth and clean brake arm assembly went pretty quickly. Although adjustment of the pad to properly hit the HED Jet C2 rim and keep it off the carbon fairing and away from the tire of course is always something you want to check and double check. And you have to peek around the frame with a bright light to properly see it.

I was glad to have spent the time to really clean it up properly. I'm guessing it will not need service for a year, depending on the riding weather.

And since I was feeling so mechanical, here's Luke's breakfast. It's two speedboats made from banana, Nutella, strawberries, coconut and a couple raisins. The boathouse is cinnamon toast and sausages. 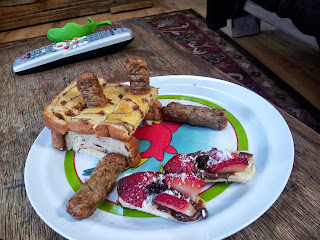 How to Recognize Someone is Drowning - EDUCATE YOURSELF in 5 MINUTES!

Summer is upon us and with that comes more people venturing into the water.

Kids especially need to be watched closely, but more importantly - adults need to know what to look for.

There is statistic in the article where about 1/2 the kids that drown, do so within 25yds of a parent or other adult!

As the articles point out, most of what you see on television is NOT the way someone looks when they are drowning.

PLEASE take 5 minutes to educate yourself.

WARNING - the video in the first article is staged, but it could be upsetting to some people. Parents should use discretion before letting kids watch.

Longer article (no video):
http://www.smh.com.au/lifestyle/life/drowning-doesnt-look-like-drowning-20130606-2nsaf.html
Posted by Kevin at 3:55 PM No comments:

Ok, it's a sprint distance, so there's not a lot of strategy, other than to go hard and stay focused so you don't lose time anywhere. Time is precious in all races, but especially in a short one. If you take a little too long putting on your helmet, those lost seconds really hurt to get back on the bike or later on the run. 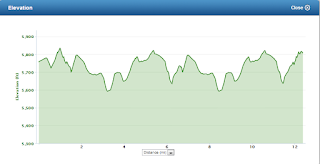 The course can be summed up by looking at the elevation of the bike course. It's basically a thousand feet of climbing over 12.4 miles, and you can see all the climbs aren't long, but they happen often.

There are a couple things I might have done differently. One is to ride my tri bike instead of the road bike. I think I could have picked up time on the downhills. I didn't because I hadn't spent enough time on the tri bike riding in aero and didn't want to mess around through corners and on the downhills trying to smooth it out. For the next 3 weeks however, all I'm riding is the tri bike in prep for Lake to Lake (Olympic distance). Second, I would have probably rode the course more like a BMX course, really hammer the hills and recover on the downhills. I think I could have rode this less smooth and still toughed it out on the run (which had it's own share of hills). 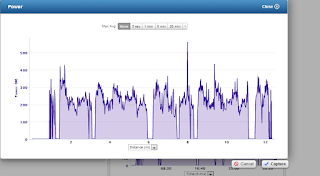 Another way to look at the bike course is to compare average power (211W) with normalized power (230) - that variability tells you that it wasn't a simple flat time trial. I also felt like I held back a bit on the bike and could have probably juiced it a bit more. Anyway, good lesson learned.

The swim was a pool swim - which was fun. I like the energy when you walk onto the deck and there are people cranking out laps in each of the lanes already as you wait your turn to hop in. It was short (475yd), even for a sprint distance (normally 740m) - so I swam pretty hard out of the gate. Had to settle into a rhythm though because we got bunched up a bit. No worries, more for the bike and run. I still think my swim has a long way to go, but it's getting there. I feel like I'm on the crest of a breakthrough on a number of fronts there.

T1 and T2 were solid. Nice and calm and smooth. Could always be faster.

The run went fine - but I felt a bit flat. It wasn't the bike's fault - some days are just like that with running. It's what I had that day. Ran a 6:54 pace, and with the hills and running on grass and dirt - that was not too bad, although I should have been able to pull a 6:40 on a better day - even with a harder bike. I don't have any data from the run because I just left my Garmin on the bike.

That's about it. Now it's time to focus on my first 'A' race - the Loveland Lake to Lake. It's Olympic distance 1500m / 26mi / 10K - although I think the bike might be a bit longer. Following the Joe Friel plan which focuses right now on blocks of intensity followed by 2-3 days of recovery workouts. 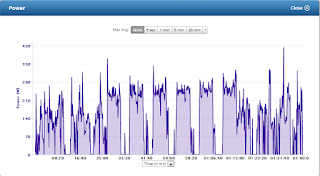 Bike workout today was 90 minutes (ended up being 1:40), with 5x5 min hill repeats at Z4 (218-254W) - recovery on the descent. Did them in aero at 230 / 236 / 243 / 247 / 252 / 257 - felt really strong and comfortable. Practiced one arm in aero on the descents to build that solid feel. Hit some 34mph+ in aero just pedaling along. Sweet. Happy with the recovery from Sunday as well as the tough swim on Monday and 5x5' run intervals at race pace yesterday.
Did a 40 minute skills based swim tonight before dinner. Was halfway down the lane on my second lap and all of a sudden there was this 10 year old girl in front of me trying to cross lanes. I had to pull up and put on the brakes. I talked to her about it being a bad idea. She could have gotten really hurt if I hadn't seen her. Whew.

Anywhooo.. I know this stuff isn't very exciting to y'all. Thanks for hanging in there and I don't blame you if you just skimmed this. I wrote it more for myself as some race notes / thoughts since I moved my training log over to using Google calendar and tend to write pretty terse notes in there these days.

Here's a few pics from the race. I'd pay for them, but these guys want like $32 bucks for each high res download. That's a bit silly. I personally think these guys could price them at $7 each with a package for $19.99 for all of them and they'd sell a lot more. And nobody looks good in race photos ;-)

Never mind the conventional ways of cheating, like just riding up a Strava route in a car, slow enough to be a believable performance, but fast enough to kick ass.

Now you can actually do the ride at an easy pace, and then juice your Garmin data prior to uploading to Strava to make yourself a bad ass - at least until someone looks up your Athlinks profile or you actually ride with someone.

Great day for a race! Beautiful and perfect Colorado weather.

Paige's dad was also up for the race so that was fun!

Also, I get to ride my bike to the race from my house and always see a lot of friendly faces (including my swim coach, Stephanie - who gave me a readout on my swim form since she ran the swim portion :-)

More race details and pics later - need to get some sleep.

Took 5th overall (out of about 85 competitors) and 2nd in my division. Was happy that since it wasn't a USAT race they used my 'actual age' rather than my age at the end of year (like USAT does). One more race not having '50' written on my calf for everyone to see :-)

And I was really happy with my overall result - still PR'ing my swim / bike / run times :-)