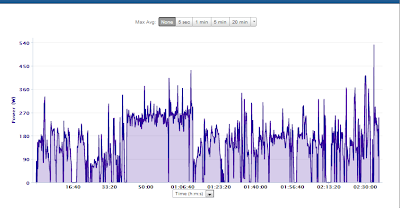 Today was the end of a 'Rest / Test' week in the Build phase of my training season.

I decided that I'd do another Functional Threshold Test on the bike since the last one I did was back in mid-April.

Functional Threshold Power (FTP) is the power that you could hold for a 40km time trial.

As I headed out at 6am it started to rain. I *almost* turned back, but I talked myself out of bailing. After all, there isn't anything technical about the course I was going to ride, so even at a decent clip, it was still safe to be out there. Also regarding bike handling - I do have *some* skills. I've also ridden enough times in the rain to just put it aside.

Got to the start location at about 40 minutes - good warm up with some wind-ups where I was hitting some good numbers (watts) that told me it was a good day to test. Pretty much recovered from the hard part of the build that ended 4 days ago (interestingly, I was still feeling it on my Friday ride, so I'm dialing in the recovery periods I think pretty well).

After a quick swig out of my bottle I hit the lap button and rolled off.


Yes, the test is not truly 40km, but the rationale (Coggan, Friel, et al) goes something like this: what you can hold for 30min is basically 5% more than what you could hold for twice that time. But in a race, you can push about 5% harder due to the adrenaline / excitement of racing. Most people can't push as hard solo (I'm one of them). So it's a wash.

FTP was 257 Watts - which is about a 15 W gain from my April test. I was pretty happy with that. My guess going into the test based on past weeks is that I was around 255 W.

Of course now that means I need to bump up all my training zones - but actually, I've been riding at the upper end of them for a couple weeks now, so no biggie.

After the TT I shut it down and rode Z2 for the rest of the 2 1/2 hours. Mostly in the light rain.