More Rattlesnake Pics and a Hard Lesson in ABV

Wow - usually I don't have jack for pictures from my races. Generally it's my fault - for example, as I stood by the water's edge on race morning and watched others snapping pictures of one of the most startling sunrises over the lake I've seen in quite some time, I realized that I'd left my phone way back in the car. Sheesh...

But others came through. Some I already posted, but here's some more:

Ok, so now your'e all asking (or have moved on to more interesting Internet stuff) - what's up with the hard lesson in ABV? And what *is* ABV? Ahhh... now do I have you back? Wait for it.....

On Sunday I decide a good recovery would be a 2 hour road ride with my buddy, Chris. Launch from Golden and we head south to some Red Rocks climbs and a circle back from Morrison to finish at the new Mountain Toad Brewery (MTB - get it??) in north Golden.


side-bar: It's our first, then second, then first again choice when the hostess at Woody's can't get us seated at an empty patio table to save anything. Keeps saying, "Yep - any minute now. They are cleaning it right now". To which I reply, "Uhhh... I'm looking right at it and they aren't doing jack and haven't been doing jack for that last 10 minutes you've been telling us that they *have* been doing jack... so long jack..."

Anyway. We head up to MTB (cool place btw) and order a pitcher of one of their craft beers. It's awesome. We order a sampler tray too 'cuz I'm a wimp and only usually order ales and wheat beers... shaaahhdup beer snobs.

Personal note to K.F. (you know who you are) I know that I keep having beers in Golden and don't text you. It's not my fault. I'm there and I think about it - and I realize that I don't have my stupid cell phone. Honestly...HONESTLY!! (gads... I suck...)

So I have less than 3 total beers ('cuz Chris is better at emptying the pitcher than my sorry butt) and I am freaking wasted. Like the world is moving in stills instead of one continuous movie like it's supposed to. I haven't been this in the bag in years. I'm trying to figure it out. 3 beers - WTF? Ok, yeah - I haven't eaten since breakfast and it's now like 2pm or so.... but *this* wasted? 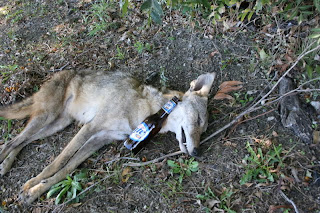 The 5 minute ride back to Chris's is comical. I can't balance very well on my bike. I tell him we need to stick to path and side-streets. I'm going slow enough that I'm not a danger to anyone, even myself. I under steer one turn and roll off the path into the grass. I fall over. I get back on and manage to leverage what's left of my awesome bike handling skills to click out before I fall over in the driveway. I then spend the next 2 hours on a bean bag chair, drying out before I can drive. I pass the time by providing important commentary an old Star Trek episode (The Naked Time - that's the name of the episode, not my state of clothing) on Netflix. Chris makes fajitas - it helps.

The next day I'm still perplexed (and nursing a hang-over) and check out the MTB website ('cuz I think the place is awesome). Oh... they list the Alcohol By Volume (ABV) of their beers as 6.5% to 6.9%. I look up  my usual brands - yeah, 4.5%. That means my 3 beers was actually like 4.5 beers. Yeah, yeah - still wimpy - but I'm proud that I'm a Sheila when it comes to being able to drink under the table.