Raced this on Saturday. I had picked it because it was the same venue and basic course of the Harvest Moon 70.3 (1/2 ironman) that I'm doing in three weeks.

It's a well run race and great venue. It's an olympic distance with a swim that was short by a couple hundred meters (1300m swim / 25mi bike / 10K run)

I don't know if you'd call it a race strategy, so much as an experiment of '1' that I wanted to try. I've noticed in my training and racing that if I go really hard on the bike, I feel crappier on the run - but I don't necessarily go that much slower. So I guess on this race I wanted to see exactly how crappy I could actually feel on the run by riding the bike portion at TT pace (meaning you ride like you are going to be done when you get off the bike in an hour).

I found (for me) It's harder to do than I thought because no matter how you try to convince yourself while riding, you still have in the back of your head that you're going to need to run after this, and I couldn't just let it all hang out. But I still went pretty hard.

Anyway, objective achieved. I felt really crappy on the run. But I didn't got that much slower. Probably didn't pick the best day for such an experiment as it was bloody hot (about 90 degrees) on the run with no shade. Then again, maybe that's a perfect test :-)

Swim:
The swim was interesting in that it was a TT rather than mass start. You went out one at a time in 5s increments in a count-up of bib numbers. The swim follows a lane out for 300m, then back on the other side of the buoys. Then you exit the water, do a 180 and head back out again. On the far buoy this time you hang a slight left on the way in and angle towards the water exit about 50m down the beach from the start.

I don't know that this makes it any less congested than a mass start, because the lanes out and back are rather narrow and your mixing in with people that are technically behind you when you do the 180 - so there's never much open water to be found. But it was fine. I got kicked a few times when I would go to pass and the person I was passing would all of a sudden start breast stroking and frog kick me in the ribs or hip. Couple of bumps and arm bashings here and there - but hey, that's the nature of the sport.

I had a really great swim. Felt strong and passed a ton of people. Didn't get passed by that many others and came out of the water feeling like was finally able to 'race' the swim portion (which was one of my pre-season goals). When I was heading in on the final leg I kept thinking how I wished I could swim further to delay putting out the hard effort I knew I was going to try on the bike ;-)

T1:
I had a goom-bah first transition. First, I couldn't get the wetsuit off over the monster sized square timing chip on my leg. OK - it wasn't that huge, but most chips are more rounded and don't get hung up. I was worried about ripping my suit, so I just took a bit longer to work it off. It wasn't that much more time (probably 10s or so), but still - clock's ticking.

The REAL dufas moment came when I tried to flying mount my bike. I had been staring down at that chip situation and was a bit dizzy when I went to mount. Missed my right foot and came to a dead stop. Re-grouped and now with the rubber bands broken (temp bands that hold the shoes horizontal and snap away when you start riding), I attempted to just get rolling. One shoe caught the pavement wrong and the bike 'hoppped' up and stopped again. At that point I'm like, "Really?". Finally got rolling but it took longer than I thought to get my feet actually into my shoes and strapped down. Total time lost in T1 was probably around a minute - but as I rolled off I just said, "Well, now it's time to go harder to make it up"

Bike:
The bike course is straight-forward, but a bit congested in the park. Plus, here's a tip to my fellow athletes. Stay to the freakin' right when you are not passing. Holy %&#^* blurg!

Once we got out onto the open road it was much better as things thinned out. I just put my head down and started cranking.

The course is an out and back on rolling hills. No shade or scenery to distract you. Just prairie. Open to traffic, but it was light and all the drivers were very courteous. There was a steady tail-wind on the way out which I didn't notice until I was heading back. At that point it was a steady headwind offset at about 20 degrees - which is actually perfect to pull an aero wheel along. You can really feel the wheel lift and pull like a sail and you just lay it up in the slot and hook in. Nice and steady, no gusts to wobble you. 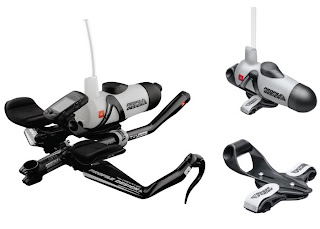 It works really well, especially with my modifications (retention strap and different, softer drinking tube). I wrote a review on Amazon and also have talked to their customer support regarding the retention issue. They said they really liked my retention strap 'design' - to which I replied, "yeah - I kind of would like the bottle to keep from ejecting all on its' own though ;-)" - they agreed and are sending a proto-type bottle cage for me to try out. Mucho cool of them.

Here's my retention strap I fashioned (it's not really a 'design' - I'd call it a kludge): 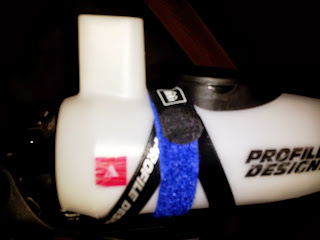 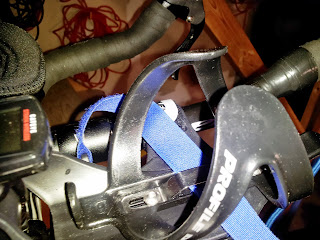 After the race I had the bottle innocently sitting on the kitchen counter (like this) so any remaining fluid wouldn't drain out of the straw and the bottle would stand up on it's own. 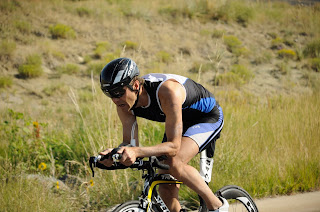 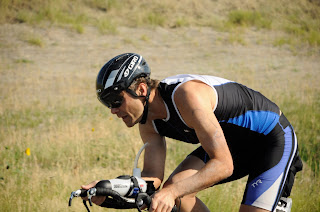 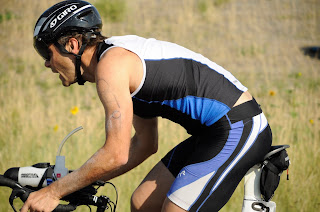 Bike went well. Just kept going hard, especially on the uphills. I only got passed by one guy that I passed again when he gassed out about 30s later 1/2 way up a roller. Never saw him again. Bah-bye.

I knew I was having a good race when I didn't even see the leaders until I was almost to the turn around (Elites went out about 15 minutes ahead in the swim start).

Kept the gas on all the way into the the park and T2. I hear Paige and Luke cheering as I come into T2 and see Luke again cheering as I exit to the run.


T2:
Uneventful, by the book and quick. Nothing to see here. Move along.

Run:
Ok - mission accomplished. I feel really crappy. First mile feels like the 4th mile usually does. But I'm turning over at about a 6:50 pace, so my crappy feeling has no correlation to my speed. But MAN do I feel lousy!

And then the heat is kicking in. No matter how hard I work at it, I just am not good at running in the heat. My perfect run-racing temp is like 45 degrees. It's almost 2x that temp. The run is an out and back and it takes FOREVER to hit the turn-around point at 5K!! The usual thoughts of stopping and walking are stronger than usual (why do those thoughts even bother - it's not like I'm going to listen and they are just annoying to hear!). I'm throwing water down my back and into my face at every mile aid station. It cools me down for like 10 strides. I take one sip of Gatorade at one station. My stomach immediately starts to knot up. Man it's hot.

About a mile from the turn-around I see the leaders. I get motivated as I know the turn-around is getting near. I'm not kidding. It's like the longest 5K segment I've ever run. FINALLY I hit the turn-around and things improve. I am slowing because of the heat, but not that much. It's manageable. At this point I'm pretty sure I'm in the lead by a healthy margin for my age group. Nobody behind me for quite a ways and the only guy in front of me is two age groups below me (via the age marking on his calf :-). Still, I pass him and move on to the next guy. No reason to hang back and then see results posted of someone that started behind me but is in front of me time-wise (one issue with the staggered start). Plus, I just want to be done - run harder.

I do have one more gear in reserve. I can feel it there - but it would REALLY hurt to shift into it so I pansy out and just keep a steady tempo.

400m from the finish. It's a big swooping right hand turn that I can see. Sheesh - that's only 400m? Seems like a mile. Ok, shut-up and just run you little girl.

Finally, last 100m. Slight downhill to the finish. I shift into the higher gear - yep, it's there - and tempo+ across the finish line. I can hear Paige and Luke are cheering me on at the finish, but only have tunnel vision. 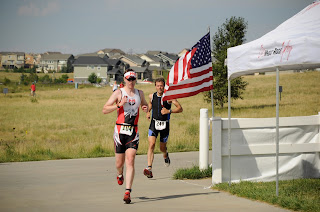 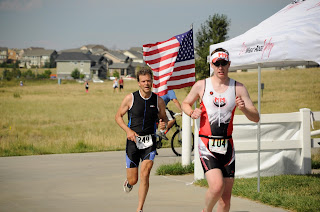 Hand's on my knees while the girl struggles to pull off the velcro strap of the timing chip. It won't release. It's like some bad juju that won't give up. She apologizes, I tell her, "I can't stand up straight yet anyway, take your time" - finally it's off.

I walk out of the chute and see Luke's little smiling face. He gives me a big hug and I tell him how happy I am that he was cheering me on.

Post Race:
Really happy with my race. Recover pretty quickly from the heat just stepping into some shade. I feel confident about my 70.3 in a few weeks. Results posted. I'm in first with 4 minutes margin - 2:20 and change finish time. Average run pace by my watch is like 10s slower than L2L - Probably 1/2 of that is the heat, not the hard bike. 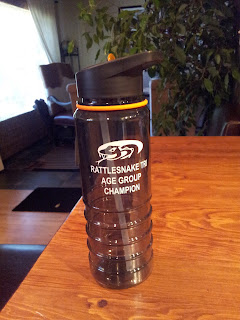 Still..... I think the Grinch's award ceremony ended with general mayhem, the mayor having his hair sheered off and a Christmas tree bursting into flames. I'll point out that none of that happened at this award ceremony.

Afterwards, hanging out with other team mates and friends. Lisa pulls a personal PR by like 20min on the course. Trish took 1st in Elite women, Bob 2nd in his AG, Rich 2nd as well - they are in larger, younger fields. Bob is 6 minutes faster than me. He's my bell weather. Great athlete, long history in triathlon and endurance sports, consistent. About 8 years younger. Someone good to chase and never catch :-)

We all talk about how freakin' hot the run was. Topic of the day.

Really fun race. And as I sit here the next day, my body feels really good. Ready for a 2 hr road ride today with Chris. Just rolling along. We'll see what's in the tank - but I suspect not a whole lot. On to the final 3 week push for the final A race of the season; Harvest Moon.... where' I'll bike and run 2x the distance. Hope it's cooler.
Posted by Kevin at 9:52 AM

Congrats on a(nother) great race. You continue to be an inspiration to those of us who aspire to do excel as we age.

Looking forward to another great race report from the Harvest Moon event.