Some Things are Just Plain Wrong... 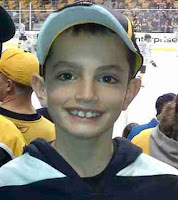 Shortly after the Boston Marathon attack, I wrote a post regarding how we should focus on the victims and survivors of the tragedy, rather than following the media's instincts to run stories about the scum and villainy that inflicted such sorrow on their victims. Victims like 8 year old Martin Richard (pictured) needed to be remembered, not his killers.

But even I could not have predicted how far into the reaches of the sewer the media would go in it's never ending effort to 'sell copy'.

By now you may have heard that many people are outraged by the cover of the August version of Rolling Stone magazine. If you haven't seen it (and I refuse to post it here) - the magazine chose to use the self-portrait the bomber posted of himself on Twitter for his cover photo. In short it's how 'he' wanted people to see him, rather than how other people really saw him and certainly not an accurate depiction of who he was inside.

I'm not here to convince you how wrong this is. If you want to have a debate, send me an eMail and I'll be happy to point out the flawed logic and inane rationale being used to justify this offensive material. Arguments such as:

and my latest favorite...

Wow. So let me get this straight. You believe that we are so stupid that we believe horrible crimes are only committed by.... what? Physically 'ugly' people? 'older' people? 'fatter' people? People that don't look 'white'?. I honestly don't even know how to respond to that, other than; "don't project your shallow, racist thought process on to all of us. It's all you and you need to square with that." -

For the record; I personally don't need a snapshot of a baby cooing in a crib to know that at one time, every monster was an innocent soul. The only variable is how far back you need to go.

The last argument also tries to leverage the tired old saying that "you aren't defined by the worst thing you've ever done" - let's remind ourselves what 'worst thing' this person did. He dropped a bag of makeshift explosives to indiscriminately kill innocent people out cheering their friends and family finishing a recreational event. The result was that he killed a little 8 year old boy, two young girls and maimed hundreds of other spectators.


"You aren't defined by the worst thing you've ever done"?

Yeah - sometimes you are.

That's enough of that silliness. If you think you have a better 'angle' of justification - by all means, send me an eMail and I'm more than happy to engage you on this topic.

The simple matter is that this is really about a magazine trying to put something offensive and controversial out there to sell copy and focus eyeballs on their advertisers. That's it.

So if you're as angered as I am at this kind of money grabbing behavior hiding behind the guise of 'free speech' / 'art' / 'starting the conversation' garbage rationale, then like me, you should do something.

Don't bother writing to these bozo's. That's what they want. Like some insolent, misbehaving child, they want attention and any attention will do. The strongest message you can send, is to make them irrelevant. To bury their thoughts and perspective in the dung heap it belongs in.

So what can you and I do?

This is about money for them - so cut off the money. Write the advertisers in the August issue (provided below) and tell them you will not buy their products until they publicly sever ties with the magazine (via a definitive press release) and stop paying them money to run their ads. To date, the responses I've received demonstrate a complete lack of responsibility. "We weren't aware" / "We're always re-evaluating our campaigns to align with our corporate values" - blah, blah... My advice to these advertisers - grow a pair and be definitive. Sadly, they'll certainly 'align their corporate values' to a loss of market share - so be it.

Here's what these guys (the magazine and it's bank rollers / advertisers) count on. They count on you and I to tire and just forget about it. They count on this to blow over. So long as they send out placating responses, they don't have to take a stance.

But it doesn't take much of your time. Maybe 15 minutes a month and a bit of tenacity on your part. First, send an eMail to each of the advertisers in the August issue. Keep it short. Tell them you find what RS did offensive and disgraceful and that you want a definitive answer from the advertiser. Tell them if they don't offer a definitive response, then you'll buy their competitors products instead.

Tell them you'll also continue to stop by the new stand at B&N or else where and simply flip through each subsequent month of RS. From here on out - any advertiser you see for that month that you normally buy from, you'll stop buying from and using their products. And then do it. Follow through.

By the way; If you do believe that the picture was motivated by the right to artistic expression and 'starting the conversation' rather than money - then cutting off their advertisers shouldn't bother them. Readers and subscribers should rally so hard to maintain this 'icon of journalistic integrity' that they should have plenty of money to continue writing and distributing their words. They'll have no problem with subscription prices doubling because their words are so valuable. True, the magazine might not be able to afford the glossy photos and salaries they once had - but their 'art' and 'freedom of speech' will continue to be preserved. In short - I dare you to prove me wrong.

Here are the advertisers in the August issue of Rolling Stone Magazine:

Recently you ran an ad for your product and brand in the August issue of Rolling Stone magazine. I find the cover photo and the magazine's stance on the issue offensive.

I would like a public statement from your company that you no longer will consider this magazine in your ad campaigns. I will interpret a non-definitive or lack of statement to be one of passive support and will discontinue buying all of your company products for my household.

I found it offensive but two quick searches will clearly indicate the point RS was making:

It has more to do with how we view terrorists. Clearly one looks like a prototypical deranged lunatic and the other doesn't.

Sorry - I've read that defense and I still don't buy it.

I'm sure that if you asked any killer to provide a posed picture of themselves, they'd all provide one where they look exactly as they'd like others to see them. Some would chose you to see them as powerful while others would send you a photo that shows them as docile lambs, yearning for love and affection.

We shouldn't care what they want. How they perceive themselves is made irrelevant by the fact that their perceptions of reality are deeply flawed.

Allowing the killer to editorialize himself on the cover of the magazine through an image that he provided, and then helping him with the additional professional PhotoShopping to smooth the edges of his iconic lie, either paints the editor as an ignorant puppet or a manipulative liar.

Why didn't rolling stone do the same for holmes or Lanza. My thought - the other two look mentally disturbed and would repel readers.

I understand your thoughts. I don't know why RS didn't. My point is that It would have been just as vile and inexcusable if they did.

There are better ways to cover the topic without glamorizing the killer.