As luck would have it, my recent trip to visit my team in China was lined up with the running of the Hangzhou International Marathon.

Because I didn't have a 'health check certificate' from the government, I wasn't allowed to run anything further than the 6.8 km fun run - but that was OK for me for a few reasons:

1. It's my off season
2. I really haven't been training for marathon distance this year
3. I don't think I would have felt great after arriving late on Saturday and then waking up early Sunday morning to run a marathon :)
4. I wanted to run with some of my team members (15 runners and some additional cheerleaders) that showed up for the race anyway, and all but one of them (Palmer) ran the 6.8 km run.

I was surprised at how big the race was. I didn't see any any statistics or results posted yet, but past on past experiences, I guessed the size of the starting line to be about 30,000 runners - maybe a bit more. There seemed to be a larger portion of the crowd running the shorter distance.

My guess (and no surprise) is that the podium on the men's side was dominated by the east African athletes that showed up - top finishers in past years have been in the 2:10 ballpark. The women's field in the past has been dominated by Chinese runners.

The start line was pretty much what I've come to expect from other marathons. Controlled chaos. There were however some noticeable differences from running a marathon in the US:

1. When the MC led the crowd in some warm-up calisthenics, the crowd by far pretty much was all doing them. There was a lead guy on a platform in a white jogging suit leading the crowd.

2. There was very little visible security at the start line, but it was very orderly and moved along. We were about 1/2 way back on the mini-marathon and it took us about 8 minutes to pass the start line (that doesn't include the marathon and 1/2 which went off earlier). There were a LOT of runners!

3. One of the funniest scenes was a guy in running gear (shorts and Nike shirt), walking around the start area with a cigarette hanging out of his mouth. Also the 4-5 guys I saw pull off the course mid-way to have a smoke break. Too funny.

4. Compared to the $100+ entry fees for US city marathons, the entry fee for the Hangzhou Marathon was RMB40 - that's about $7 bucks (late registration doubled to $13 a couple weeks out). My mini-marathon entry fee was about $5 bucks.

I ran most of the way with one of my colleagues, Diego Zhong. We ran a progression starting from an easy jog to about 7:00 pace for the last couple km. I opened up to 5K pace (probably around 6:15) for the last km. Some random guy flew by me at one point and then promptly blew up about 50m later. I think he was trying to race me but may have started his kick a bit early ;-)

Afterwards we hung out and cheered the rest of the team coming in and then took some post race pictures. I wasn't up to heading to the finish area (it was a point to point) and waiting for a few hours for Palmer to get in - my jet lag was catching up with me at this point. So I went back to the hotel for a nap and to relax the rest of the day.

Overall, a nice way to spend the weekend there. Next year we're planning on having a bigger team and running the 1/2 together. I'll have to get there early to get my health certificate ;-) 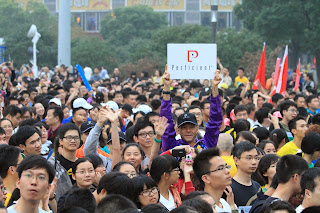 Can you pick me out? 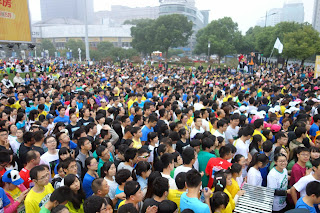 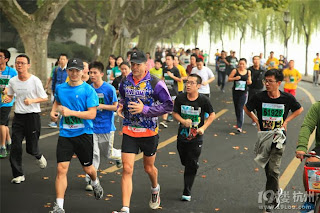 I guess being the only westerner in the 7km race gets you famous on the 19th floor web-site
That's Diego to my right. 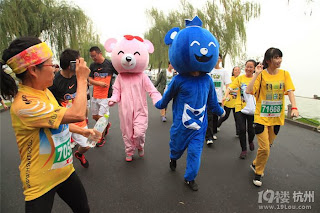 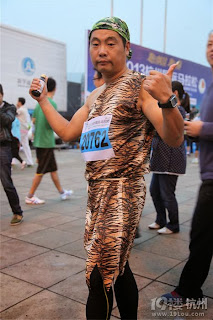 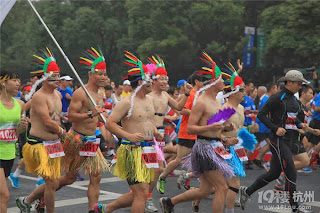 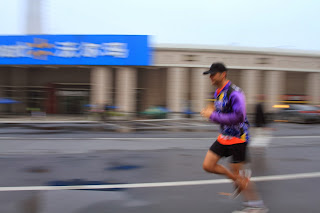 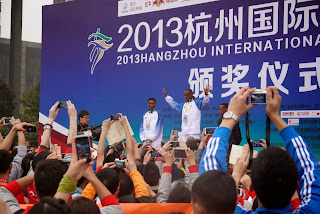