A Proposed Solution to Age Grouper Doping (detection and prevention)

It's back, another collection of random thoughts - none substantive enough to be an entire blog post in themselves... none very useful in practical life. But informative and compressed into bite sized, twitter-esque chunks of wisdom and parody.

Ok, well let me back gracefully away from the wisdom and parody stuff. They are random though.

I claim the usual excuse for my absence. Lot's of family and work commitments, travel and lots of good quality training and sleeping. Certainly more noble than the 'shiny object' excuse I was going on about a few posts back.

First off; when relaying the latest random (and in my lone opinion - 'newsworthy') item of the day, I generally get asked (mostly by my wife who is perpetually concerned that I'm losing it), "WHERE DO YOU FIND THIS STUFF?"

The answer of course lies in the miracle of modern day organizer of worthless chaos, the aggregated news feed and twitter. From there it's just a few short clicks while tipping back my morning coffee and you get items like this..... 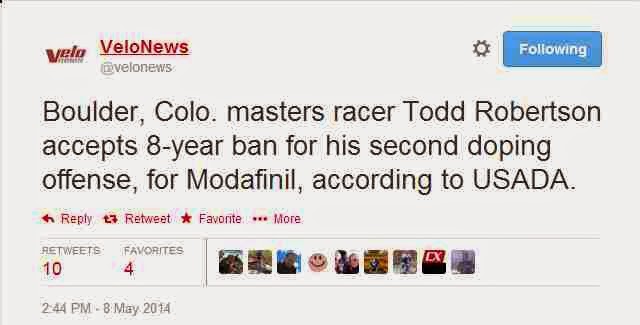 With about 5 seconds of research, I found this article regarding Mr. Extraterrestrial's first offense:

Robertson, 49, tested positive for a banned oxygen-enhancing peptide hormone as the result of a sample collected as part of USADA’s Out of Competition Testing Program on February 11, 2011.  Oxygen-Enhancing Peptide Hormones are prohibited under the USADA Protocol for Olympic and Paralympic Movement Testing and the International Cycling Union (UCI) Anti-Doping Rules, both of which have adopted the World Anti-Doping Code.

So, let me get this straight. Less than a year off his 15 month suspension for doping, he's popped again? Sorry, this guy is a '1st Degree Doper' (Tim O'Donnel's term). In my opinion, it's a lifetime ban for him, here's why:

Why am I so steamed about this? Because as torqued off as I get about pros doping, I'm unlikely to toe the line next to LA or Levi. They don't really take anything away from the work us clean age groupers do to get faster. We can be mad about the lost integrity, LA's attack on people that initially called him out, and the bad example it sets for our kids; But they aren't taking a podium spot away from a hard working age grouper.

This guy is in my frickin' age group. I've never raced against him, but it gets you thinking about just how many age groupers might be using; either as a 1st Degree Doper or rationalizing away 'Daddy's Little Helper' (LowT treatments) as 'just trying to be normal'. Sorry - do like the rest of us; play the cards you're dealt. If you feel like you need some T treatment for lifestyle related ails, then don't race or get a valid TUE (Therapeutic Use Exception). If they won't grant you one, too bad so sad.

Ever look through a KOM on Strava or your local race and think, "WTF?" I mean there are a few guys that are wayyyy ahead of the pack. You look them up on Athlinks and you can see the spike. One year they are mid-packers, a couple out they are crushing. Now lot's of those guys are legit I'm sure. Hard work, great genetics that were previously untapped; It's the wondering that grinds on me.

And the fact that the testing in age groupers is nearly non-existant (cost) - and we are STILL seeing guys getting popped? The statistical extrapolation can be a bit unnerving.

Anyway - my reason for writing this wasn't just to whine. It's to propose a practical solution to the problem... wait for it.....

In any sanctioned race, ANY athlete may challenge ANY other athlete to an in competition test. The only catch is that the challenger has to pay for the test (generally around $300 - but I'm sure we could get it down to $100 bucks or so). The price would keep this from turning into a logistical frenzy, but it opens the door for those a couple steps off the podium to attain peace of mind and also would provide a better statistical sampling than we have today on just how bad (or not-so-bad) the problem is.

I think it would also cause some athletes to start thinking twice about glowing like some alien spacecraft or a ball of illuminated swamp gas if they have to worry about a much more statistical reality of a random whiz quiz between stepping off the podium and tweeting about their middle-aged accolades to all their buddies.

What do you think?

To those athletes that still think nothing of shoving this stuff into their bloodstream, and wreaking havoc on their man-bits; I offer this public service appearance from Senhor Testiculo to burn into your wee brains...