I needed a race to do prior to Nationals. Looking at the calendar in the spring, zeroing in on the weekend that would be perfectly spaced from one of my key races of the season, I stumbled upon the Steamboat Sprint. "Perfect", I thought. short little race. Cool, local vibe... and I clicked to sign up.

Here was one minor fact I overlooked; the race is at 8100 ft. Did you know that the amount of oxygen available at 8100 ft is about 25% less than at sea level? Granted, I live and train at about 6000 ft (about 20% less than sea level), but that extra 5% makes a difference. Brilliant. Let's go do what is essentially a VO2 max workout at a place where there is actually *less* O2. Awesome.

Ok - I'm really just kidding around. Although it's true I didn't really think it through when signing up, everyone is in the same 'boat' (pun intended), and what doesn't kill you.... well... it can make the lights go out... but luckily, it didn't. It just *hurt*.

My hurt was at least cushioned by the beauty of being in the 'boat. I really, really, really love that place and have great memories through the years of it. Besides skiing with some buddies, Paige and I went up there while we were first dating and went to a 'Strings in the Mountains' concert there. That trip was also the place I learned that my wife to be is NOT a gonzo mountain biker chick. That's ok. She's a fast swimmer, cyclist and triathlete - so I guess I'll keep her ;-)

Pre-race:
I drove up the afternoon before the race. Just solo'd it given other commitments that Paige had back home. That's cool - I'm not very exciting before a race. It's a perfect evening for me just to stroll around town a bit, early dinner and then back to the room to read and prep for the race.

While I was up there solo, I wasn't alone. Plenty of friends / teammates up there to chat with. It's pretty cool to drive 3 hours by yourself, head to the race site and then see a bunch of people you know setting up in transition - not to mention hanging with after the race.

When I rolled up to the race site, the car-mometer read 41 degrees... thaaaahts right. Didn't really worry because I had some intel from Evie (another team-mate and friend) that had done a swim the day before and reported that the water was a great temp. Also knew it would warm up quickly once the sun was fully awake.

The caption for the photo was the quote I thought of looking at my transition set-up. You have to put it in context of the movie quote I patterned it after in my head:


For some reason, movie quotes / scenes kept popping into my head all morning. I don't know what made me think that way. Maybe it was the solitude. Maybe my brain just retains useless stuff. Either way - it's entertaining (for me at least).

Once I got transition set up, I went out for a 2 mile run just to loosen and warm up. Then I stood around just chatting with the rest of the crew. Wrapped that up and headed out to do a little warm-up swim and wait for the horn.

Swim:
Water temp was awesome - about 68 degrees; I was actually hoping for a couple degrees cooler. Lately it's been so, so warm in the local ponds with a wetsuit on. I find myself digging a deep paddle on my stroke, just to feel some colder water.

Did a quick lap out the first buoy and back. Then back to stand around listening to the pre-race meeting.

Ok, remember when I said movie scenes kept popping into my head? So we're all standing around, feet in the water wearing our wetsuits. And we ALL know what's really going on while we pretend to intently listen to the race announcer detail out the course. Immediately I thought of this clip from Elf - except you have to make the following word substitutions:


If you're a triathlete, you immediately understand. If you're not... well.. know that we all.. errr... "sing in the store"

And if you're now never able to watch your favorite Will Ferrell movie without transposing the words as above - your welcome.

Anywhooo...swim went great - I continue to love my Roka Maverick Pro wetsuit, and I got to use a pair of the Roka prototype open water goggles - which rock; Will be interesting to see what the production line ends up looking like in the fall.

One funny thing to note was that around the first two buoys, it was pretty shallow. During the pre-race instructions (I can *sing* and listen at the same time), the director mentioned that if you had any trouble in the water, the first thing you should try is to just stand up.

A number of folks did and it was strange to be swimming full out while passing these folks just standing up - most likely just getting their wind or wits back about them. Hopefully they weren't *singing* some more... <gag>.

Bike:
T1 was relatively quick. Had a little wobble trying to fit my first foot into my cycling shoe - call it running up the the hill a bit too fast, leaning over and being at altitude. Deep breath, try again - and out we roll onto the course.

The course was described as a 12.4mi out and back with *rolling* hills. True, they were rolling at one point; but the climb out for the first mile was a grind. Match burned - check.

Scariest part of the day was the sweeping left hand turn, descending from that first hill. I rounded the corner, in aero, pulling 39.2 mph (I looked it up on my Garmin file); and there crossing the road is about 4-5 deer. One in particular was on the side with that, "do I stay or do I bolt" look in her eye.


Now your average mule deer weighs between 130 and 200 lbs (I looked it up). I'd estimate that looked about right as I whizzed past them. Luckily, Mr. Indecisive continued continued to ponder whether he should dart out in front of me as I passed safely. Good thing, otherwise I might have had to pull what this guy did; after I picked myself up out of the ditch and reset my collarbone.

I mean, why call the weekend a total waste when you can make venison nachos.


Anyway. Rest of the bike was big fun. Some butt-head being cheered on by his buddy from the side of the road decided to pull out the stops to re-pass me on the final hill; upon which he blew up and rolled wheezing on the last 1/2 mile park road into transition, where I couldn't easily pass him without endangering others. Brilliant there Einstein - you're man-bit ego cost me probably 20-30 seconds on my bike split waiting for your sorry bum to recover.

Run:
T2 was a blaze. I went minimalist. No sunglasses, no visor / hat, no watch. Just racked the bike, slipped on my running shoes and grabbed my race number belt and out on the run I went.

My strategy for a sprint (which I've tested) is to not hold anything back on the bike. I think too many people do that. Honestly, I've personally found that if I go really hard on the bike, I can still run just about as fast as if I held back a bit. I just *feel* crappier on the run. It makes the run something you don't look forward to, but if you know it's coming, then you just deal with it.

The run started out with that climb for the first mile. Oh man, did I feel like garbage. Passed the 3rd place guy in the first 1/2 mile. Tried to look smooth and strong so he wouldn't chase. Felt like someone had injected my legs with meat tenderizer, but I held my head high like I *meant* to look like someone that had been jolted out of a Valium induced sleep by yelling, "Oh, my god - wild boars are chasing you!" - I looked really stupid.

But then the legs came on the first descent and I felt like a runner again. Got a quick glance back at the top of that first hill and nobody was chasing - cool.

At the time I thought I was in first. Turns out, the first place guy had come out of the water 2 minutes ahead of me and I would only chase back a minute of that. Damn.

The only thing the altitude affected was my run. I just could not turn my legs over as fast as I wanted without going into O2 debt (that point where you're running next to Elvis and trying to share the same straw to suck air through).

The other kicker was that is was a 3.5 mi run rather than the typical 5K. I knew that going into it, but forgot until I was most of the way through the run. You might think there is little difference between a 3.1mi and 3.5mi run; but let me tell you. I know how to run 10K pace and 5K pace - it's like a digital switch. So here I am just running at 5K pace... which is cool until you get to 5K. Then it really, really hurts.

Luckily, one of our coaches (Susan) was out on the paddle board to cheer us on while we ran on the trail next to the lake. Game me somebody to wave at and a few moments to not think about how my lungs were searing - or how bad of an idea it was to finish the re-fried beans with dinner the night before. When will I ever, ever learn?

Post Race:
Crossed the finish line and fought off the usual dry heaves. Felt better within about 30 seconds (such is sprint distance). Checked results and found I was 2nd in my division. Oh well - at least I can use the excuse that the winner was a local resident.... ahhhh... maybe not. He was just faster.

Got to hang with the peeps and stand on the box. Then headed back to the reality of a 4 1/2 hour drive home (freakin' I-70 construction / summer traffic). Still, was big fun. 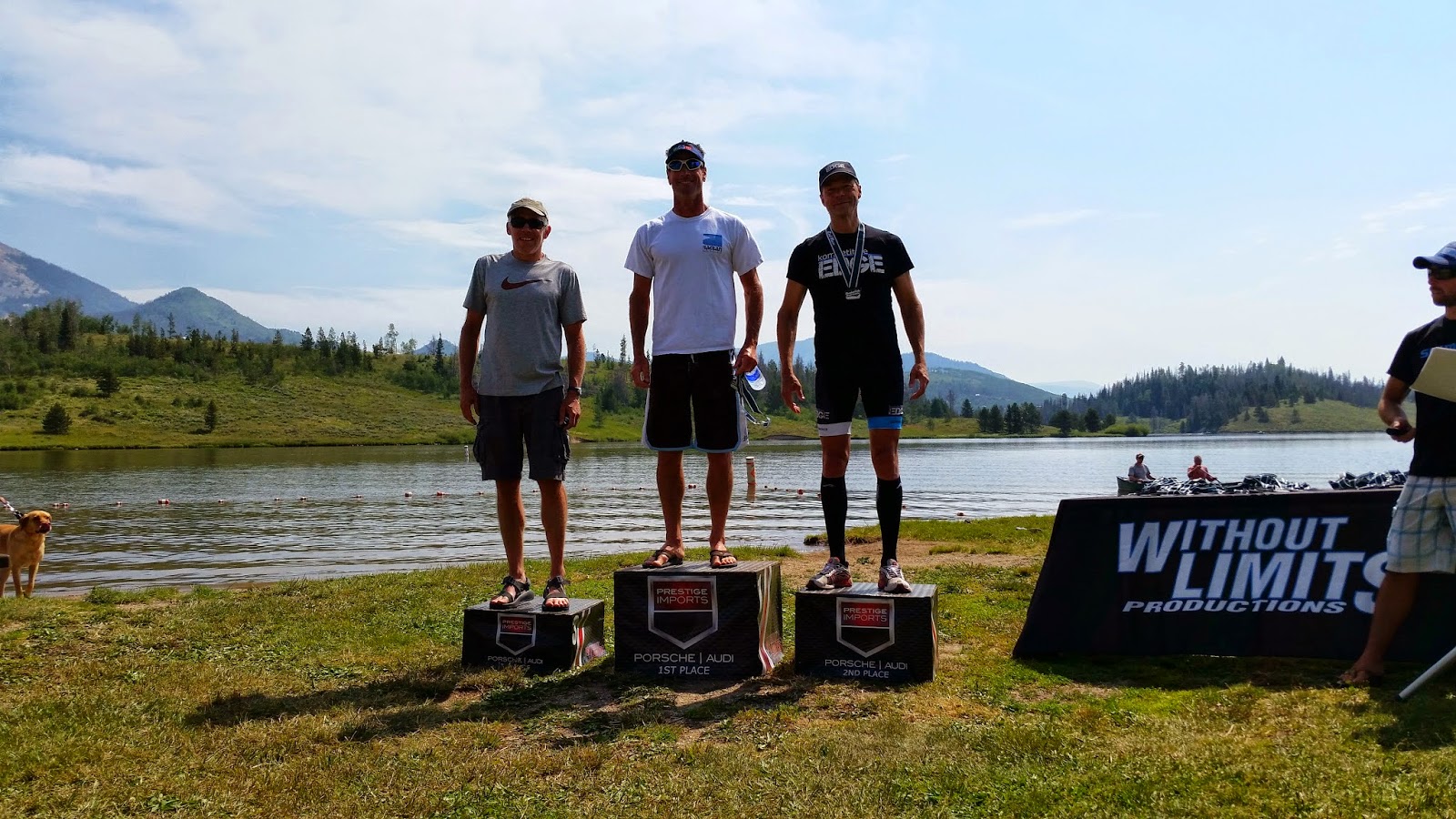 Now on to Nationals!
Posted by Kevin at 5:21 PM